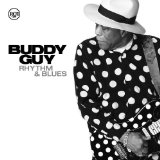 What do you get when you mix a 77 year old master blues man and a 52 year old Grammy winning producer, song writer and musician with a penchant for ambitious projects?  You get Buddy Guys’ first two disc album with a plethora of new material and five big name artists who perform with Buddy!  Buddy’s fans across the globe will eat this up.  His work in the studio is focused and it is all done up with pristine sound.  Kudos to Buddy, Tom and the team for pulling this off!

Given that there are two CDs, they are each individually named.  As the title of the album notes, this is Rhythm & Blues, so the first CD is entitled Rhythm and the second Blues.  The contents of both do not vary too much thematically.  They both contain Chicago blues done up right by their master and his cohorts.  The first CD is a bit more “produced,” with a lot of horns and B3 and backing vocals, while the second is a little more bluesy and starker.  Twenty one tracks, seventeen of which are new, two Mel London cuts and one Guitar Slim song make up this package.  Hambridge was involved with writing all the new materials while Buddy is credited on five of them.

There are a lot of big production numbers here on the first disc.  Buddy opens with “Best In Town” where he tells us when he came to Chicago and Muddy was playing that he didn’t have to be the best in town until the best came around.  The song serves as testament to new artists to give it their all and be the best that there is but to recognize those who blazed the trails and have down it before. The Guitar Slim cover “I Done Got Over It” has a big horn section accompanying Guy and it’s done quite well.  It also reminded me that Guy’s “Done Got Old” from Sweet Tea seems to have some loose basis on this old Mel London song, both being great songs in their own right.  “The Devil’s Daughter” is a wicked cut about a reportedly wicked women that Guys sings about relating with.  “Whiskey Ghost” is a cool and haunting song that is particularly interesting.  The other new cuts are really good, too, but space precludes calling each one out.  He closes the first CD with a short and very cool instrumental groove.

The one thing I don’t like here (as in a lot of all-star guest appearances on albums) is bringing in big talent from other genres and expecting the blend well with the blues.  Keith Urban joins Buddy for “One Day Away” and it really does not mix well; Urban is a great country musician but the mix of him and Buddy just doesn’t cut it for me.  But while that is somewhat innocuous, the track I liked least on both CDs was replacing Junior Wells with Kid Rock and reprising “Messing with the Kid.”  It’s not really that bad, I just am not a Kid Rock fan and he is just way too affected here for my tastes.  The other track on the first CD with a guest star, however, is superb.  Beth Hart, who performed for Buddy’s celebration at the Kennedy Center Honors, really excels with “What You Gonna Do About Me.”  She is gritty, down and dirty and just spectacular in her duet with Buddy.  She knows and feels the blues oh so well, unlike Urban and Kid Rock.

The second CD opens to the funky strains of “Meet Me in Chicago,” which serves as an homage to Buddy’s town and a travelogue of sorts to boot.  It’s a big production and Buddy wails on this as no one else can. “Two Damn Bad” is quintessential Buddy and Chicago blues. His vocals and guitar work are impeccable and it is my favorite song on the disc.  He is emphatic in his indignation telling his honey that it’s just, “too damn bad for you!” “Evil Twin” has some high highs and low lows.  Steven Tyler sings with Buddy, not exactly my cup of tea, while Joe Perry and Brad Whitford also join Buddy.  On the positive side, it is pretty much an excuse for a huge guitar solo with some fun lyrics thrown in.  I’m just not much of a Tyler and Aerosmith fan.  However, Gary Clarke, Jr., joins Buddy for “Blues Don’t Care” and the two give us some stratospheric guitar work and there is also some nice piano by Kevin McKendree.  The other original cuts are well done and give us the message that at 77 years of age Monsieur Guy can still deliver the goods and he is still on top of the game.  He ends with the classic “Poison Ivy” and gives us a swinging and jumping rendition that is a hot dance number.

Barring a few little warts, this is a nice package of mostly new songs; Buddy demonstrates to us that he is still one of the blues worlds’ best.  His work is solid here, a great testament for a 77 year old legend.  Hambridge also shows us why he is so much both in demand and in the limelight.  He really can pack a lot of punch into his stuff.  While not perfect, the defects do not detract from the great material that is also here.  As I said at the start, Buddy’s fans will eat this up; those new to him can get an appreciation for this master blues man.  While I might not want to start my Buddy Guy collection with this album, it certainly ranks up there and contains some fantastic new songs.  I recommend this for anyone wanting to hear some classic Chicago blues done up fresh and hot!