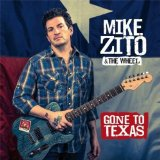 Mike Zito has been on a roll the last few years. In 2010, the title song from his Pearl River recording, co-written with Cyril Neville, won the Blues Music Award for Song of the Year. Next, he joined Neville and guitarist Devon Allman, drummer Yonrico Scott and Charlie Wooten on bass to form Royal Southern Brotherhood, a band that has been tearing up the festival circuit ever since. The group is nominated for a 2013 Blues Blast Music Award for “Blues Rock Album” and garnered a Blues Music Award nomination in the same category.

Now the talented artist adds even more fuel to the fire with a new release featuring his latest band of hand-picked musicians, The Wheel.  Scot Sutherland has played with some of the best in the blues world, including six years on bass with the Tommy Castro Band. His rock-solid playing earned him a Blues Music Award nomination for Bass Player of the Year. Saxophonist Jimmy Carpenter was a long-time member of Jimmy Thackery’s band. He also has been a featured member of New Orleans legend Walter “Wolfman” Washington’s band. The man with the beat, drummer Rob Lee, is another New Orleans resident who has backed Johnny Sansone and Mia Borders. A veteran of Delbert McClinton’s band, Lewis Stephens, handles the keyboards while Susan Cowsill adds backing vocals.

This disc finds Zito honoring the state of Texas, where he fled to from his St. Louis home in search of love, redemption and escape from the addictions that had taken over his life. The title track delves deep into the Zito’s psyche as he looks for a new beginning, well-aware that he has reached the point-of-no-return and thankful for the healing power of love. “Rainbow Bridge” has the singer traveling through Louisiana, propelled by Sonny Landreth’s sizzling slide guitar licks.

Sutherland and Lee lay down a thundering groove worthy of Led Zeppelin on “Don’t Think Cause You’re Pretty” that Zito attacks on slide guitar while his raw vocal issues a warning to women trying to get by on looks alone. The pace immediately downshifts for the cautionary acoustic country blues “Death Row”, a harrowing depiction of where the singer might have ended up had he not found salvation.

On “Take It Easy”, Zito pleads for patience as he attempts to build a relationship. Carpenter flavors “I Never Knew a Hurricane” with a seductive tenor sax solo as Zito pours out his anguish over a broken heart.

Other highlights are “Subtraction Blues”, sporting a choogling rhythm and clever lyrics from the leader about a woman that has his mind messed up. Stephens gives the Hammond organ a ride on the funky workout “Don’t Break a Leg” and Zito trades lead vocals with Delbert McClinton on “The Road Never Ends”, a unruly rocker with some scorching slide guitar from Zito. He gives another unvarnished look at the world of an addict on “Hell on Me”, singing and playing like a man possessed. The downward spiral continues on “Voices in Dallas” with Zito high and alone, talking to an empty room. Carpenter’s baritone sax and Cowsill’s hypnotic vocal contributions amplify the bone-chilling mood. “Wings of Freedom” has Zito celebrating his salvation while praying that those he left behind will find their own escape route from dependency.

This is Mike Zito’s celebration of his new life – and his frank, unerring confession of what his life once was. Collectively, the program reaches out to you with genuine passion, intent on letting us share in the details of every step of his journey.  The veteran band matches Zito’s energy every step of the way. Musically, it isn’t always blues, but Zito drills deep into the facts of life, the core of the blues tradition. This one comes highly recommended!