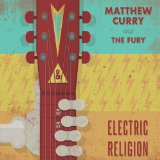 Matthew Curry at 18 years of age has released his second CD. His first was outstanding and Crossroads Blues Society nominated it for consideration in last years’ IBC competition for best self-produced CD. Would the sophomore jinx come into play on Matthews’ second release? Hell no!

Curry along with his band mates wrote all ten tracks offered up here, so it’s all original music. A purist would not call it a “blues” album, but the music is certainly steeped heavily in the teapot of the blues. Curry is again on guitar and lead vocals. Greg Neville is on drums, percussion and vocals while Eric Nelson is on keys and vocals and Jeff Paxton is on bass and vocals. Curry is an unassuming, humble young man with a huge talent; I think is going to make a huge mark on the music world.

“Love Me Right” opens the set and it is a big, rocking tune. Curry opens with some slick guitar, the keys layer over it and then he breaks into the first verse. His vocals belie his age; he sounds years older in his singing than he really is. A little edge, some polish and a good dose of grit resonate through his delivery. He complements his guitar which also has the same characteristics. He effortlessly moves up and down the fret board and puts on a show here and throughout. He goes into “Set Me Free,” a slower cut where he tells his of his woman whose gunshot killed him (but set him free). It’s a big and dramatic piece; Nelson goes off on an almost sentimental solo, Curry returns for a chorus and then finishes with a huge guitar solo. “Six String Broken Heart” is a ballad of sorts where Curry sings to Nelson’s piano. The guitar and backline tie it all together and Curry and the band behind him sing their hearts out. The relational pain in all his songs cannot have been experienced by him and yet he sells the emotion and pain of lost lovers and relationships. He picks it up a bit with “Put One Over” that is done pretty much in a traditional SRV mode. He builds into huge guitar solos with a driving beat and an emotional and gutsy set of lyrics; it’s a damn good song. Curry blows us away on his solos and Nelson stays right there with him, blending his keys into the fracas.

Curry next breaks into “Hundred Dollar Friend,” the story of a girl who is driven to an occupation through desperation. He tells how she lives with her demons “in a filthy one room shack” and then breaks into a stunning guitar solo that is over the top and yet effective and superb. In “JMH” Curry begins with record static to give it a dusty, old field and then Curry goes off on a huge, wild six string ride. Very impressive! “Genevieve”is a love song with a little happier theme. He does a big, rocking tribute to this girl/woman both vocally and on his ax. The guitar sings as he picks and does riff after riff of classic stuff.

He then gives us real, slow Chicago blues in “Bad Bad Day.” Curry begins with a guitar testimonial that stings and tears at you. He then breaks into a gutsy vocal about a minute into it; the title tells it all. He sings of having to drive around in his car to get away from all the things he’s endured. Nelson offers up a nice electric piano solo here for us, too, and then switches to organ for more. He goes “Down The Line” next; Nelson adds a funky line on keys to spice things up and Curry sings of moving on down the road and getting away. A cool song for the road and it’s about the road. He concludes with “Louanna,” another blues rock ballad of sorts with a Marshall Tucker sort of feel to it. His guitar work is precise, balanced and fluid with clear and well done vocals.

Curry has done a very good job here and also in paying tribute to his Dad who recently passed away. Paul Curry left his family and this world far too soon (he was only 46) and was instrumental in supporting Matthew and his musical career. Curry endures and continues his career with his mother’s support, the support of his more than able band, and the fine work of publicist/booking agent Dr. Karyl Carlson (who is also the Director of Choral Activities at Illinois State University). I met Curry earlier this summer and he is a very focused person who takes his music seriously.

This would be a very impressive album for a seasoned and more accomplished musician; given that he recently turned 18 only makes it more impressive. Curry is the real deal. He is perhaps bridging out into rock based blues a little more, but he remains solid in his conviction as a blues musician. His second album is an outstanding set of tunes and I can’t wait to hear the next one and many, many more! He writes songs with intense emotion and delivers them with even more. Highly recommended!!!