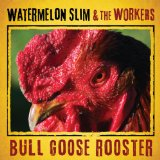 Watermelon Slim is an amalgamation of blues, country, folk, rock, and gospel.  He delivers up a wide ranging mix of tunes here, 9 originals and 7 covers, all of which feature his unique vocals and his deeply sincere emotions.  Slim is the vocalist and plays harp and electric and acoustic dobro slide guitar.  Michael Newberry is on drums and percussion, Cliff Belcher is on bass, Ronnie “Mack” McMullen is on electric guitar (except for “Trucking Class” which has Ike Lamb on guitar).  Gary Nicholson is also on acoustic guitar on the final cut “Words Coming to an End”.

I would group and classify the songs into honkytonk, rock with a folksy, bluesy twist, a sea shanty and a spiritual.  The honkytonk stuff further breaks down into blues and then country music, albeit with loose lines separating them at times.  Let’s take on the easy stuff first.

“Take My Mother Home” is an acapella spiritual that is moving and well done.  The rawness of Slims’
approach gives this an earthy charm and realness.  I was very intrigued.  “Northwest Passage” is of the nature of sea shanty’s and is another acapella tune.  Again, Mssr. Homas sells this well with his strident baritone.  It ain’t blues, but it’s good.  The cuts I would call rock with a folksy, bluesy twist are “Vigilante Man,” “A Wrench in the Machine,” “Prison Walls,” and “Words Coming to an End.”  “Vigilante Man” is a Woody Guthrie song and Slim pays him good homage with his cover and offers up some sweet slide.  “Wrench” is almost a country tune, but I rate it more of a folk tune that breaks into a rock song.  Maybe that is country, but the guitar approach made me think rock and it’s kinda fun.  “Prison Walls” again verges on country but again the guitar and slide along with the song itself make me think more rock than anything.   Again, well done. “Words Coming to an End” is the acoustic finale to the album and it is bare bones Homas and Lamb.  This song is very classic folk rock and a good conclusion to an eclectic set of tunes.

Honkytonk with more blues are 6 of the 16 cuts.  “Tomorrow Night” opens the CD and Homas blows some sweet harp to get things going.  It’s a rollicking cut and serves well to begin the festivities here.
“Over the Horizon” is duet with Trampled Under Foot’s Danielle Schnebelen with piano by Dennis Borycki (no other instruments).  It shows Homas under restraint with the huge voice of Danielle to sing with and he pretty much pulls it off.  A bluesy ballad where Danielle is not belting out in full voice gives Slim a chance to keep up and it is well done.  Slim is in classic form on the covers “King Bee” and “Scratch My Back.”  He is strident and confident delivering these classics and does  great job with them.  “The Wobble” is a hot, deep blues instrumental with a driving beat and Slim laying out some mean licks on harp.  “Foreign Policy Blues” has Slim singing that he has, “the foreign policy blues worse than he ever had.”  Being a Viet Nam vet with a deep concern over that era it surprises me that Homas has even greater concerns.  Some sweet slide here makes this a good cut, too.

On the other side is honkytonk with more of a country feel.  “Bull Goose Rooster” is the title cut and is a big ass trucker tune, as is “Blue Freightliner.”  They are fun and obviously come from a period in Slim’s life near and dear to his heart.  “I Ain’t Just Whistlin’ Dixie” mixes blues, rock and country.  “Trucking Class” is another trucker tune and Slim offers up some classic country slide licks.

William P. Homans (AKA Watermelon Slim) uses his lispy and country fried vocals to good effect across these genres.  His slide and harp work are excellent and the set of tunes is a wide ranging and interesting assortment.  Watermelon Slim is a former trucker and farmer, was a soldier in ‘Nam, comes from a fairly well off family that he rebelled against to join the Army, and then earned several degrees and became a Mensa member. After a near fatal heart attack in 2002 he reassessed his priorities and so music became his focus.  I think he’s a hoot and a lot of fun.  If you like blues with a liberal dose of North Carolina hill country mixed into it and the perspective of a man who thankfully claims he’s lived enough for two regular lives already then get this CD.  I think you will enjoy it!