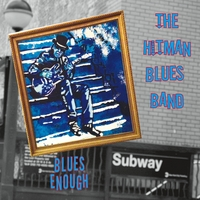 Veteran New York blues guitarist and vocalist, Russell "Hitman" Alexander, started The Hitman Blues Band in 1989.  Since his dad was a world renowned jazz musician, Hitman grew up thinking being a musician was a normal career.  He started playing guitar in his early teens and was performing to audiences regularly by age 16.  He was so busy playing guitar and singing that he had no time for college and ended up dropping out.  He has played with the likes of Johnny Copeland, Smokey Robinson, The Ink Spots, Diana Ross and Whitney Houston to name a few.  He has toured Europe several times and his previous CD, "Pale Rider" was in the running for four Grammy nominations.

Although every song on the album is worth mentioning, a few of my favorites are:  the title track, "Blues Enough", a rocking blues number written after Hitman judged a "King of the Blues" contest where the final criteria was "Is it blues enough for you?"; "Sam The Bluzman", a tribute to well-known New York blues guitarist Sam "The Bluzman" Taylor; the lamenting "Every Piece Of Me", a song about the way heart break affects your whole body; and "Streets of Downtown", a perceptive number about people who probably have it worse than most of us do.

This album combines great guitar, horns, harp, drums and keyboards with meaningful lyrics that tell stories we can all relate to.  Definitely worth a listen and likely to become a keeper if you give it a shot.