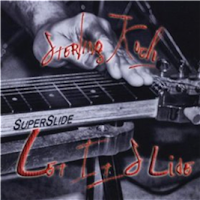 Sterling Koch plays lap steel guitar, and is from Pottsville, PA.  His recording career began in 1982 with a harder rock/metal edge.  With over a dozen recordings to his credit, he moved towards the blues a little over 10 years ago.   On his last recording, the great Tommy Shannon played bass guitar.

The disc contains 8 originals and 5 cover songs.  It opens with a Koch penned a slow paced intro to “Shape I’m In” (Benno/Branhill II).  It then busts out to a rockin’ version of the same song for the second cut.  Pretty good vocals too by Sterling on this song.  Cut number 3 is a self penned steady blues rock number called “Wrong Side of the Blues”.  The lap steel guitar rolls strong on this one.  The often covered “Mercury Blues” is next.  The lap steel gives it a bit of different feel.  A strong Texas feel oozes out on the self penned “Blow My Mind”

Up next is “It Hurts Me Too” from Elmore James.  Koch carries on with the lap steel in a positive way on this cover.  Vocals might have reached a bit higher to hit the higher parts of this song, but it does have a great instrumental feel.   “Too Sorry” is up next, a cover from Doyle Bramhill’s album “Bird Nest On The Ground”.  This is an old Texas favorite of mine, and done quite well.  Another Texas style song “I Don’t Know Why” follows.  It is a Koch original with some fine bass lines and a boogie feel.  Next up is an instrumental, with a Jeff Beck feel.  “Lonely Avenue” is the title, and it is a well played, slow number.

The last cover on the CD is next.  It is authored by Rick Vito.  “My Baby’s Hot” picks up the pace with slow fine slide work.  The pace picks up some more with the Koch penned “I Want To Be Your Driver”  This one rocks out with a tight sound from the band.  “I Only Want To Be With You” slows it back down and the band gets into a slow bluesy groove.  It’s going to get the dancers grinding away at a live show.  The closing number “Working Man’s Blues” gives the drummer some more room to let loose on this self penned faster paced blues number.

Sterling Koch brings some solid sound, and some quality material.  Give this CD a listen, and go see him if he hits your area.