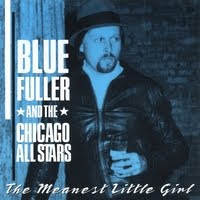 Karma. It’s an over used word in our society, but maybe it’s overused because the concept comes into play so many times in our lives and we just don’t realize it. This CD was a bit of a karma experience for me. Barrelhouse Chuck and I have (well, mostly the “I” part of that) procrastinated over me visiting his home to peruse his extensive collection of records and blues memorabilia which he correctly and affectionately entitles “his museum”. Well, I finally broke down to do so and it happened to be an evening when his good friend Gil “Blue”Fuller was in town for a few days, visiting Chuck from Indiana.

If you Google Blue Fuller (his name is Gil, actually), you won’t find much except for this CD. That’s kind of sad because he’s a blues and jazz singer whose vibrato tones are both pleasing and interesting. He hooked me up with his CD and we played a couple of tracks before I left and I listened to the rest on the way home. It’s a great set of tunes with an even greater set of musicians. Accompanying Fuller are Barrelhouse Chuck on keyboards, Billy Flynn and Joe Campagna on guitar, Kenny and Willie Smith (and sometimes John Carpender) on drums, Michael Peters on bass and Sam Burkhardt on sax. It’s a great cast backing up a great singer!

The title track was penned by Fuller and features Chuck on both a mean piano and Farfisa. Blue bemoans his baby staying out all night long in his unique, understated vibrato. While fronting his band, he never tries to distance himself from them and he creates a mellow blend of his voice with the instruments. He’s an old-styled crooner who is a part of the band. His breathy and controlled voice sells itself to you and makes you fall into a good little music listening space. On Kim Wilson’s “Wait On Me”, Fuller’s gritty vocals are top-notch; they effectively use the piano and sax to replace Wilson’s harp. Muddy’s “One More Mile” is the only track featuring the harp, and Pierre Locoque joins Blue for a vocal and harp “duet” that is sweet and oh-so Chicago. “Caledonia” gets a jumping cover with everyone in full swing. This sound could be today or it could be 60 or more years ago in some smoke filled South Side joint- blues done in a timeless fashion.

There lots of good stuff here. I really loved the title track, but one cannot pass up “96 Tears” and “Carol” without noticing. The ? and the Mysterions cover is beautifully covered with Fullers’ vocals and Chucks’ organ work really selling this one. That’s one of the tracks I had to play before I left, and there was Gil and me (kind of) singing along, with Chuck banging the keys of an old organ in his basement; three middle aged men acting like teenagers jamming to the tunes together. It was quite the moment. And in “Carol” we get Billy Flynn doing Berry (something he did a lot more of quite well in the 2008 “Cadillac Records” film), with Chuck just busting up the keys and Blue wailing on vocals. Fun, fun fun!

If you like you blues served up in the old styled Chicago way, then you’ll enjoy this CD like I did. Gil Fuller’s an undiscovered vocal gem and the backup band are killers. Blue even lets them throw in a few instrumentals and they are sweet, too. “Wa Wa Blues”, “Chuck’s Blues”, “Betsy’s Boogie” and “Past Life”are all grooving tracks. The CD is available on CD Baby. Check it out, but I warn you that when you do, you will be parting with some cash because you’ll want to add it to your collection!
Posted by Crossroads Blues Society at 7:52 AM No comments: