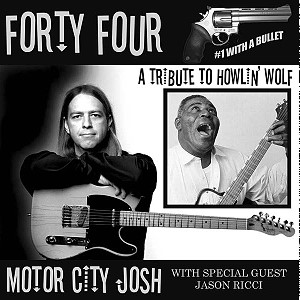 Motor City Josh has just released " Forty Four: A Tribute To Howlin' Wolf". Josh Ford is a 35 year old Blues singer-guitarist who started his music career in Detroit. After 10 years there he moved to Atlanta, then Chicago and now has returned to Detroit. Since 1987, he has performed in the U.S. and Europe. He also has recorded nine self produced cd's, the latest being "Forty Four A Tribute To Howlin' Wolf". During his career, Josh has played with many blues artist including Buddy Guy, Delbert McClinton, Tinsley Ellis, Rockford Illinois’ own Cheap Trick and many others. Besides having his band, Josh is also an acoustic solo performer.

Josh's band includes himself on guitar, vocals and tambourine, Johnny Rhoades on guitar, Chris Douglas on standup and electric bass, Justin Headly on drums and Shawn McDonald on piano and organ. Joining him with backup vocals are Johnny Rhoades, Stacia Ford,and Eric Savage. Josh has surrounded himself with a fine blues band. A special added bonus on this CD is Jason Ricci on harmonica, courtesy of Delta Groove Productions.

Josh opens the recording with the title track "Forty Four". Although the the crude roughness of of Howlin' Wolf is not present, Josh's rendition is really good. He brings with him a Wolf like vocal of his own. Fourteen years of singing and smoking has brought this quality to his vocals. This is all good for me.

"Back Door Man" featuring Jason Ricci is an outstanding track on "Forty Four". It was real a treat to hear Jason doing his true blues style. Josh does a fine job on this tune and Jason adds the highlight to a great Howlin' Wolf tune.

Josh's goal with "Forty Four A Tribute To Howlin' Wolf" is to pay tribute to Howlin' Wolf and the songs he sang. To me he has done this well. If you are looking for a Howlin' Wolf clone or copycat do not look at "Forty Four" for it. Motor City Josh has do a swell job of interpeting the Wolf's music and showcasing his own talent on this tribute.
Posted by Crossroads Blues Society at 4:10 PM