Songs From The Road reviewed by Steve Jones 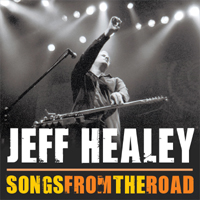 I remember becoming a Jeff Healey fan when I watched “Roadhouse” in the movies twenty years ago. I was amazed looking up that is was 20 years ago. Losing Jeff to cancer was such a blow to his family and fans. This project began when Jeff was still alive and looking over some of the stuff from his 2007 tours through Norway’s Notodden Fetival and London. A couple of added tracks from his Toronto club round out a nice live set of tunes. His wife Christie his engineer Alec Fraser have assembled these eleven cuts of covers that help us remember the joy and power of Healey’s music.

From the opening riffs of Mark Knopfler’s “I Think I Love You Too Much” to the closing “Santa Bring My Baby Back (to Me)” we get to see Healey having fun doing what he does best– playing music with reckless yet controlled abandon.

There are some covers here that most would never attempt. Tracks like “Whipping Post” and “White Room” have Healey wailing away in his finest Duane Allman and Eric Clapton modes. Dave Murphy’s gravelly vocals and organ with Healey’s strong axe work really sell the Allman song. Fraser provides the vocals and bass on the Jack Bruce/Cream classic and one can flashback to 1969 while listening to the powerful cover.

“While My Guitar Gently Weeps” and “Come Together” give us his take on George Harrison and the Lennon/McCartney Beatles. The former tune is one of my favorites here. Lovely guitar and vocals by Jeff that really give us such an emotional take on a great song.

He also covers Willie Dixon blues standards like “I’m Ready” and “Hoochie Coochie Man” in a creative manner. Murphy’s piano on “Im Ready” fills in nicely around Healey’s guitar, but it’s Randy Bachman and Healey’s stratospheric dual guitar work on the other song that really make it special.

The lap steel guitar wails on the next to final song, giving us a harmonic rendition of Graham Nash’s CSNY standard “Teach Your Children”. A frenetic “Stop Breaking Down” and Healey’s ever-soulful cover version of “Angel Eyes” round out a spectacular group of covers that give us Healey at his best doing music from all over the rock and blues world.

The album is therapeutic for his fans, giving us a large dose of this great musician at the height of his craft in 2007. In a way it also saddens me that the sounds from this live album will never again be heard live. RIP, Jeff. Thanks for the fine music!
Posted by Crossroads Blues Society at 5:34 PM