Escape from the Chicken Coop reviewed by Steve Jones 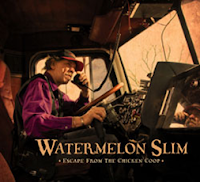 Well, he did it. Watermelon Slim has been hankering to release a country CD and he finally did. This is not at all a blues album in any respect nor was it intended to be. Bill Homans gives us 13 tracks (10 of which he wrote) of full blown corn pone, chocked full of whining Caterpillar engines, skinny women, fat cigars, highway wrecks, friends on the porch, homage to Hank Williams, American wives, long roads ahead and 18 wheelers. The album is dedicated to Dave Dudley, of whom Mr. Homans respects deeply.

I am not a big country music fan, so let me start out by giving you that warning. I like the classic stuff like Johnny Cash, Hank William’s songs (but maybe not his delivery) and other artists in that genre. Pop country like Garth and Keith and Faith is just that, pop. What we have here is closer to the classics than pop, but it just seems to be a little bit sappy and sentimental like country can be, without the glitz and glamour of pop country. Slim is adept at delivering a convincing country song and he does it 13 times. Often the twang and hick-ieness get a bit overbearing for me, but Slim is convincing in delivering traditional country fried lyrics, and country fans will enjoy his approach as will Slim’s dedicated blues fans.

Highlights of this album include a nice duet with Jenny Littleton on “You See Me Like I See You”, where her vocals are delivered in high-Dolly Parton style with the two of them trading lyrics back and forth. Slim follows that with a dirge-like “Wreck on the Highway” where his deep baritone gets down into your soul. “Should Have Done More” is another darker number and Slim delivers it with great conviction as he does with “300 Miles”. He closes out with two more upbeat tracks, “Truck Drivin’ Songs” and “18, 18 Wheeler”, where my toes tapped to the beat no matter how hard I tried not to.

I’m still not a deep country fan, but I kind of liked this album because it ran the gamut of upbeat and down home to dark and almost sinister stuff. Slim is a pretty cool guy and with this CD he is paying tribute to the fellow truckers and highway warriors who he drove with for many years. If you need to go down to the country, Bill “Watermelon Slim” Homans gives you the vehicle to get there with this CD. And be warned now that there will be more vehicles in the fleet, because he laid down a total of 21 tracks in his four days of Nashville studio time. Slim always gave us a little twang with his previous albums with the Workers backup band, and here we have it cranked up and delivered all the way with a fine set of supporting country artists behind him.
Posted by Crossroads Blues Society at 5:43 PM