Between A Rock And The Blues reviewed by David Stine 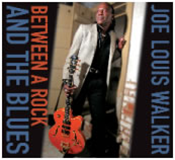 Duke Robillard has been as busy as the CDC during a swine flu pandemic. He has played on and or produced at least one CD of every batch the blues society got this year. The new Joe Louis Walker is no exception. Robillard produced it, plays on one track and brings in some of his stalwarts to play one it: namely Doug James, Bruce Katz, and Mark Teixeira. Kevin Eubanks from the Jay Leno band adds guitar to two tracks as well, and there’s some tasty harp from Sugar Ray Norcia on the final track.

To Duke’s credit, he doesn’t get in the way of things as heard (or not heard) on his work with Eddie Clearwater and Roscoe Gordon. But this is definitely Walker’s outing, not Robillard’s. Walker has been around awhile and this, by my count, is his twentieth album. He doesn’t stick strictly to common blues, but mixes in some rock, swing, some jazz leanings. Walker wrote five of the twelve songs on the CD but certainly puts his stamp on each cut. Standouts include a an outstanding bluesy cover of Ray Charles’ “Blackjack,” an rocking wah wah infused cover of Roy Gaines “Big Fine Woman,” and the swinging “Eyes Like A Cat” written by Travis Phillips. Walker’s own Prisoner of Misery” sounds like an unreleased Otis Rush track.

Walker will be 60 this year, but from the sound of this CD, he has no intension of “getting old.” The CD kicks off with the full-throttle “I’m Tide” a phonetically-spelled double entendre about life’s grip. From the first song to the last, an acoustic and harmonica cover of “Send You Back,” the CD let’s walker unveil his influences. Sometimes this can be jarring; especially if not well edited and it seems like there is drastic shift in mood or a track was added at the last minute. Here, Robillard allows Walker to show his shills and yet the CD is even and very enjoyable.

Anyone not familiar with Joe Louis Walker might want to grab this CD. There is much to like about it, and it showcases his talent nicely. He has a fine voice (years in a gospel group?), plays a heck of a guitar, and his writing talent is on par with the majority of blues smiths working today. Kudos to Duke Robillard for letting Walker be himself and adding the right amount of “direction.”
Posted by Crossroads Blues Society at 5:22 PM