Lucky to Be Living reviewed by Mark Thompson 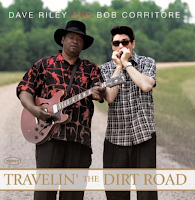 The second release from the duo of guitarist Dave Riley and harmonica ace Bob Corritore continues their expert blending of Riley’s modern Mississippi delta blues with the driving Chicago sound that Corritore grew up with. Riley has a deep, expressive voice that is perfectly suited to the down-home style found on his four originals as well as songs by Frank Frost, John Weston and Fred James. Backing musicians on various tracks include the legendary Henry Gray on piano, Chris James on guitar, Dave “Yahni” Riley Jr. & Patrick Rynn on bass and three different drummers.

Opening with a Frost tune, “Jelly Roll King”, Riley pays tribute to the veteran musicians who were his mentors and friends. Sadly, with the recent passing of drummer Sam Carr, every musician mentioned in the song has left this world. Riley maintains a steady rhythm on the guitar and Corritore weaves his harmonica lines around Riley’s vocal with expert precision. The driving performance of “Ride With Your Daddy Tonight” features some great piano work from Gray on another Frost composition.

“On My Way” has the duo backed by drummer Frank Rossi. Despite the stripped down accompaniment, the track still brims with energy behind Riley’s booming vocal. The trio also nails another Riley original, “Back Down the Dirt Road”, with Corritore’s harp once again echoing his partner’s singing. Two tracks feature just the leaders, with Riley switching to acoustic guitar on “Country Rules” and Corritore adopting a more basic style of playing.

Another highlight is the powerful rendition of Weston’s “Sharecropper Blues”, which lays out the plight of a system that allows a man to work all year only to be left deeper in debt. Riley sings with the conviction of a man who understands the system all too well. Corritore once again manages to dazzle with his sensitive backing. The title track includes a raw-edged vocal from Riley and some mournful tones from Corritore’s harp on a Frost original that rejoices in life while acknowledging some of the tribulations that have been endured along the way.

“Let’s Get Together is propelled by Eddie Kobek on drums. Corritore flat-out wails on the harp and Gray contributes another superb piano part. The disc closes with “Automobile”, with Gray, James and Gray trading licks behind another strong Riley vocal. It is a fitting close to a project that expertly captures a style of blues music that is rarely heard anymore. This is the real deal – songs that take an unflinching look at life, played by musicians who have lived the life and are still here to make beautiful music that addresses the human condition as only the best blues music can. Highly recommended !!!
Posted by Crossroads Blues Society at 4:32 PM