Many Shades of Blue reviewed by Mark Thompson 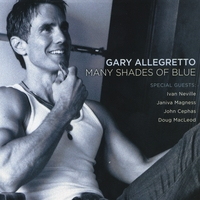 
This is the third release for Gary Allegretto, yet it is a safe bet that even die-hard blues fans remain in the dark about this talented musician. His interest in blues music was sparked at a young age when he attended a live performance by acoustic bluesman John Jackson. After spending years satisfying his wanderlust, Allegretto now focuses on music, including his non-profit organization, Harmonikids, that brings music to special needs children. He is a talented singer with a warm tone and a skilled harp player who is equally comfortable playing in electric and acoustic styles.

On “She Speaks to Me”, Allegretto sings the praises of his instrument to a Jimmy Reed-style arrangement that finds him playing effectively in the upper register. Tracks like “Good to Go” and Chuck Berry’s “Back to Memphis” are straight-ahead rockers with Allegretto blowing hot licks with full, rich tone over the driving beats. Steve F’dor adds some sparkling piano parts on both tracks. On “Bad Man”, Allegretto plays the part of a sweet lovin’ daddy on a scale equal to Jesse James and Billy the Kid. He spins a humorous tale on his original tune about a woman with honesty issues on “Tattoo of Truth”. His harp dances around the melody, spinning out a rich, inventive solo.

Four tracks finds Gary paired with the late John Cephas. “Saddle Pony” utilizes some standard blues lyrics but Cephas picks out an intricate pattern on acoustic guitar while Allegretto blows some fine country licks. Another Allegretto original, “Hurry Down Rounder”, is a folk blues made for dancing with the two men harmonizing on the chorus. The duo takes a similar approach on Hank Williams’ “Mind Your Own Business”, with Rich DelGrosso adding his mandolin to the mix.

Other special guests include Janiva Magness, who adds backing vocals on “Risk of Love”, a track that also has Ivan Neville on Hammond organ and a great slide guitar solo from Tommy Kay. Magness and Neville handle the lead vocals on “Four Days Late”, a heart-breaking song that chronicles the delayed response by all levels of government to the disaster wrought by Hurricane Katrina. Doug MacLeod enlivens “Somerset” with his usual superb picking on his national resonator guitar and more outstanding piano from F’Dor.

Many Shades of Blue certainly lives up to its title. Allegretto’s heady brew ranges from Piedmont style acoustic blues to hard rockin’ electric numbers. He has put together a stunning package that marks him as a compelling songwriter, a masterful harpist and a strong singer. While his more famous friends make significant contributions to this project, it is Allegretto’s vision that burns the brightest. It’s hard to believe that he has not garnered more attention up to this point. This recording, which has received Grammy consideration, should finally get him the recognition that he deserves. This one is highly recommended !!!
Posted by Crossroads Blues Society at 5:44 PM