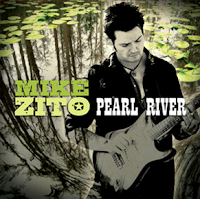 Mike Zito released one helluva fine album last year after touring almost endlessly along with releasing four self-produced albums. It spent 6 weeks on the Billboard charts and received much acclaim for Zito’s voice and guitar playing along with it's superb production standards. It was a hard act to follow, but Zito and Randy Chortkoff’s Electogroove Records followed it up with an album that is even better than the first!

What sets this apart from the first for me is two things. The obvious one to me is the more extensive use of the supporting cast. Not that the backup players were not a factor on the first album, but here they are really there and making the front man sound even better. Reese Wyanan’s piano and organ are used sublimely. The big organ sounds and piano are used as punctuations to the music and round out the already superb sound to make it even better. Harp work by Lynwood Slim (“Last Night”) and Randy Chortoff (“Born Blind”), vocals by Cyril Neville, Susan Cowsill and Anders Osborne (who also plays acoustic guitar), and Johnny Sansone’s accordion supplement Zito and his rhythm section of Popcorn Trevino on bass and Eric Bolivar on drums and percussion. The second reason I think this is a better CD is that I think the nine new songs written (at least in part) by Zito and the four other songs are even better than the thirteen on the first album!

Chorthoff and producer David Z obviously wanted to go a little more New Orleans styled with this CD. The “single” for this CD is the title track which Cyrill Neville and Zito penned together. Neville also accompanies Zito on vocals; it has a down home, Cajun flavor that Zito delivers so convincingly with his soulful voice and guitar work. He closes the song with a blistering guitar solo (as he does on a few other tracks). Add to that Anders Osborne singing and playing acoustic guitar on his song “One Step at a Time” and Susan Cowsill’s vocals on the more winsome “Shoes Blues” and we can fully appreciate Zito’s take on funky New Orleans blues. It’s still Zito’s show, but we get to see him vary his style and he is quite up to the task.

“Dirty Blond” opens the CD in a vibrant and upbeat manner. Double Trouble’s Reese Wynan’s organ here and keyboards throughout make a beautiful statement and really rounds out the sound. The driving guitar beat and Zito’s vocals set the stage so well for an outstanding album. Whether delivering an original song like “The Dead of Night” or covering classics like Sunny Boy Williamson’s “Eyesight to the Blind”, Mike Zito’s vocal prowess and guitar wizardry are mind boggling. Sansone’s accordion on the former adds to the Cajun flavors while uncredited harp work helps blow away the latter. “Natural Born Lover” is more rock-like and features another no holds barred Zito guitar solo.

Whether it be Cajun, soul, funk, blues or rock, Zito is the ultimate pro. He delivers a fine performance track after track; there are no slouches or half hearted effort here. This is a fiery hot album of blues delivered by a guy whose star in the blues world is rapidly rising. This album is a must for serious blues lovers.
Posted by Crossroads Blues Society at 5:23 PM