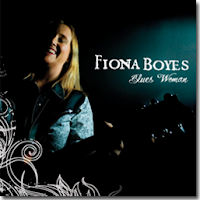 Boyes, a native Australian, is being recognized as one of the premier blues songwriters and performers today with the release of this her second album . Over the past three years, she has been nominated for major Blues Music Awards nominations.

Blues Woman is the second album for Fiona Boyes on Yellow Dog Records. It delivers some of the finest contemporary blues with a wide range of styles from acoustic to electric guitar. The album was recorded in Austin Texas with a complete band featuring Antone's house guitarist Derek O'Brien, bassist Ronnie James, and Jimi Bott on drums. Also featured on the cd are guest artists Marcia Ball, Pinetop Perkins, and Watermelon Slim.

She opens with "Woman Ain't a Mule" making a statement for women's rights. She emphatically informs her man that she is taking him "back to school" when comes to treating her with respect. She continues with the Mississippi Hill county tune "Howlin' At Your Door" inspired by Robert 'Wolfman' Belfour, a Mississippi bluesman. She growls out great lyrics combined with an almost hypnotic electric guitar sound on this tune. Boyes transforms an early JB Lenoir tune "I Want To Go" into an energetic acoustic boogie on the next cut. "Train To Hopesville" incorporates great back up vocals, the piano of Marcia Ball, B-3 organ bass of Nick Connolly, and Texas Horns into a tune about traveling that lonely train of hope. "Look Out Love", written by Australian blues musician Chris Wilson, is done as a shuffle featuring Watermelon on dobro guitar.
Chicago blues number "Got My Eye On You" features Kaz Kazanoff on sax with Fiona giving fans a sample of her slide guitar work. Fiona really slow things down with her ballad "Do You Feel Better". "The Barrelhouse Funeral" reaches us from the pulpit with Watermelon Slim opening like a Hell-fire and brimstone Southern Preacher, Fiona joining in, Marcia Ball on piano, Watermelon following up with harmonica, and The Congregation providing the background vocals. "Place of Milk and Honey", influenced by Fred McDowell, is some of the finest acoustic guitar tunes by Fiona on the cd. The song is all about the stressful life of making a living as a musician on the road. Up tempo "Waiting For Some Good News" features the producer Kaz Kazanoff on harmonica throughout the entire song. "Precious Time" tells us time is too precious to waste on some relationship that is going nowhere! Grabbing a fishing pole and heading to the "Fishin' Hole" would be the advice given by Fiona as she once again entertains us with her resonator guitar and authoritative vocals. Her electric guitar expertise is best performed in the tune "City Born County Gal". Her only solo on resonator guitar, "Juke Joint On Moses Lane", is a song about the Bradfordville Blues Club, a favorite blues spot outside Tallahassee. On the final cut of the cd "Old Time Ways", Pinetop Perkins opens with a few words followed by Fiona rollin' and tumblin' on guitar and Pinetop still pounding the keyboard at 96.

I don't think I have heard a CD with such variety of guitar styles both electric and acoustic. This magnificent CD is proof that Fiona Boyes will be preaching the blues for a long time.
The following quote is a statement by Fiona Boyes about the blues. "I am very proud to be a part of the blues tradition". "And I believe that it is vital and exciting and growing, and I'm doing my best to keep it that way".
Posted by Crossroads Blues Society at 5:40 PM