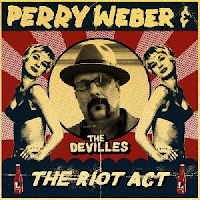 Perry Weber & The DeVilles second CD, "The Riot Act", has just been released. Perry Weber has been on the blues scene for over twenty years. During that period, he has developed his own guitar style, his own vocal talent and became a writer of nice blues lyrics. Playing with the likes of Jim Liban, Hubert Sumlin and The Legendary Blues Band, Perry Weber has paid his dues and became a great blues artist. In 2007, Perry formed his own band, Perry Weber & The DeVilles, and released their first CD, "Savage Beauty". This first CD was well received by the blues community.

The Perry Weber & The DeVilles Band consists of Perry Weber on guitar and vocals, Benny Rickum on harmonic and and guitar, Tony Menza on bass and Victor Span on drums and percussion. The band also has several guest DeVilles on this project. Joining the mix is the legendary piano player Barrelhouse Chuck. His credentials are too long to list but are quite impressive. Besides playing with Bo Diddley, Otis Rush and Kim Wilson, he is also the piano player in the movie "Cadillac Records". Jimmy Voegeli, from Westside Andy/Mel Ford Band and now his own band The Jimmy's, is featured doing some fine keyboard playing on "Riot Act". This is a great addition to the CD. Also, they have Jimmy McCarthy as a guest guitar player.

"The Riot Act" consists of twelve songs of which eight were penned by Perry Weber. He has done a good job of mixing tempos and styles of song so we not having to hear the same old blues structure over and over as on some recordings. His lyrics also make you listen to the story that he is telling.

The title track, "The Riot Act", features trouble with women as a theme. This is true blues. Perry Weber's guitar licks stand out on this track. Add some blues keyboard and some harp playing and Perry has a real deal blues tune going on with this song.

"Bernie's Bounce” is a special treat for all you harmonica lovers out there. This does include me. Benny Rickum is featured in this instrumental tune. Benny's long harp solo with just the drummer really highlights Benny's talent as a harmonica player. This is another really good addition to this CD.

"Ten Long Years", is another woman gone wrong tune with some more good lyrics from Perry Weber. Featured on this tune is the awesome piano playing of Barrelhouse Chuck.

Perry Weber & The DeVille's new release, "The Riot Act", is a good example of a blues recording done right. The great band, special guest players, Perry Weber's searing, tangy guitar licks and blues lyrics all stand on their own to make this a really good recording. This is a CD to listen to and enjoy over and over again. It makes me anxious to see a live show of the band.
Posted by Crossroads Blues Society at 5:30 PM