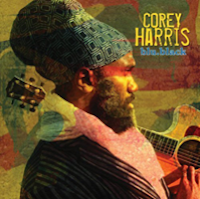 Corey Harris started his career as an acoustic performer skilled in the Delta blues style. He quickly moved on to start an exploration and study of the cross-pollination of musical styles from various parts of the globe. In 2007, Harris was awarded a MacArthur Fellowship grant in the amount of $500,000, which gave Harris the financial freedom to continue his studies.

His latest release examines the African-American musical diaspora, utilizing reggae rhythms as a foundation for many of the tracks. Harris mixes in soul, gospel and jazz influences to create a compelling mix of original material. Producer Chris “Peanut” Whitley helped write many of the tracks and also helps out on a variety of keyboards. Harris handles the guitar parts and the lead vocals.

The lilting rhythm of “My Song” serves as a counter-point to the quiet defiance expressed in the lyrics. Twin sisters Davina and Davita Jackson raise the energy level with their superb backing vocal parts. “Babylon Walls” is a straight-ahead reggae piece that warns of the impending Judgment Day. Harris also serves up an indictment of the seamy side of the business world on “Pimps and Thieves”. A lighter mood prevails on “Run Around Girl”, which adopts a Caribbean beat with a soulful vocal from Harris. “Conquering Lion” summarizes the history of Ethiopia and the enduring impact of the Emperor Haile Selassie, the key figure for followers of the Rastafarian movement.

The closing number, “Blues”, is the only number that utilizes the standard blues format. Harris plays electric guitar and Whitely shines on piano and organ. Some listeners may bemoan that the lack of traditional blues material. Savvy listeners will marvel in the power and passion that is present in Harris’s singing throughout the disc. He clearly has found profound inspiration by refusing to limit himself to the narrow constraints of one musical genre. The MacArthur Foundation described Harris as a musician who “forges an adventurous path marked by deliberate eclecticism”. His efforts on this recording certainly live up to that standard.
Posted by Crossroads Blues Society at 5:35 PM