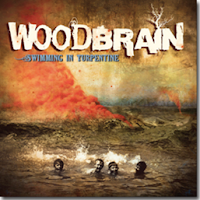 One exciting trend in recent years has been a wave of bands that have been pushing the boundaries of blues music as well as developing fresh, challenging mixes of blues with other forms of roots music. Not all of these experiments have worked but the efforts certainly have raised the profile of blues music with younger generations of listeners.

Woodbrain is a band of veteran musicians who use the blues tradition as the starting point for their musical explorations. The quartet creates a dense audio landscape that blends elements of Mississippi hill country blues with rock influences to create a heady mix sounds like a larger band. Joe McMurrian handles all of the lead vocals and the guitar parts. Jason Honl is the bass player and adds some organ on a couple of tracks. Many blues fans will recognize the name of drummer Jimi Bott, who has played with the Fabulous Thunderbirds, Rod Piazza & the Mighty Flyers plus Mark Hummel’s band.
David Lipkind adds harmonica, backing vocals and an occasional cackle.

Tracks like “Dig” show Woodbrain’s unique vision. The arrangement features Lipkind’s harp run through some effect pedals and McMurrian creating a driving rhythm on the banjo. “Port Chicago Highway” is another highlight with McMurrian turning in an appropriately gravelly vocal and laying down a sinister guitar line over a stomping beat from Bott. The group steadily builds the intensity throughout “Home of My Own” aided by another strong vocal turn by McMurrian. The band switches to acoustic instruments for “Storm Clouds”, reducing the volume level without any loss of emotional impact. Lipkind gets a chance to show that he is a strong harp player even without the effects.

Their cover of Bukka White’s “Shake Em on Down” sets a relentless pace and a spaced-out guitar solo from McMurrian. On “Turpentine”, he contributes some nasty slide guitar and another rousing vocal in his dark, thick voice. “Good Man” really shows off the influences of Mississippi blues masters like R.L. Burnside on the band’s sound.

The last few tracks don’t hold up as well. “Hurricane Town” comes across like an alternative rock piece with little blues content. The last two tracks, “Next Stop” and “Pottsville Conglomerate”, are instrumentals that collectively last over 11 minutes but never really have much to say. Better is the acoustic jam on “Black Water Slide” , a Bert Jansch tune that gets n energetic rendition with some excellent harp work from Lipkind.

There is plenty to recommend on Woodbrain’s debut recording. The band has an original sound and each member has plenty to offer instrumentally. They play to their strengths for most of the disc, with McMurrian especially shining in the spotlight as the front man. If you are looking for something beyond the traditional blues format, give this disc a try.
Posted by Crossroads Blues Society at 5:21 PM