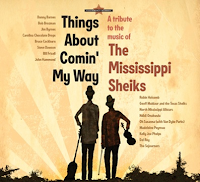 Things About Comin’ My Way - A tribute to the music of The Mississippi Sheiks
Various Artists
Black Hen Music
www.blackhenmusic-.com
17 tracks/66.21

Something bad happened to me in the 70s, leaving me with negative feelings toward all things folk, bluegrass, goodtime, jug band, and, well, string band. As a result, all I know about The Chatmon brothers as The Mississippi Sheiks is a vague recollection of hearing “Sitting On Top Of The World” once or twice. So it was with some hesitation that I applied my ears to this recent tribute to The Sheiks put together by slide guitarist and producer Steve Dawson. If you pay attention to the subtitle, you get a hint: the music of the Mississippi Sheiks. Dawson’s stated goal was not to recapture the sound of the Sheiks but to bring their tunes to a new audience.

As I mentioned, I have little in the way of reference point for this tribute, but a listen or two reveals that each artist seemed to approach a Sheiks song with his or her own arrangement and stamp--Dawson‘s goal. And this, to me, make the CD far more enjoyable than a bunch of artists trying to ape the sound The Sheiks achieved in the 1930s.

While not a huge fan of string band “blues” I found this CD very enjoyable. The varying approaches to the songs by these artist may, indeed, draw new listeners to the originals by the sheer power of the lyrics. Some “tribute” CDs quickly become cutout fodder because the contributing artists lend their names but not their passion. This CD, however, is clever, artistic and unique. It belongs in the collections of those enjoy early blues and string bands. Robin Holcomb’s eerie, jazzy, minor key reading of “I’ve Got Blood In My Eyes For You” is worth the price of the CD. Close is Onukwulu’s sultry voiced and jazzy “Things About Coming My Way.” Not all songs are pushed into modernity, and the combination of each artist’s “tribute” makes this one of the best “various artists” CDs I’ve heard in a LONG time.
Posted by Crossroads Blues Society at 5:19 PM