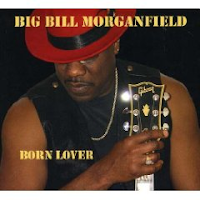 Big Bill Morganfield, has become a great blues guitarist, song writer, singer and performer. One would think that this would just be natural considering that his father was McKinley Morganfield, Muddy Waters. Big Bill was a school teacher first after he received his degree in English from Tuskegee University and his communications degree from Auburn University.

After his father passed away in 1983, Big Bill decides to learn to blues play guitar to honor his father. He learned to play the old traditional styles of the 1930's - 50's. In 1999 Big Bill Morganfield released his first album, "Rising Son". He also received the W.C. Handy award for the Best New Blues Artist in 2000.

Since 1999 Big Bill has released several cd's including "Blues In The Blood" and "Ramblin' Mind". Besides extensive touring in the United States playing many blues festivals and events Big Bill has toured all over the World in the last eleven years.

Big Bill Morganfield has now released his latest project, "Born Lover". This cd is his first on his own label, Black Shuck Records. Included on the cd are twelve fine blues tunes of which three were penned by William Morganfield himself. His band for the album consists of Big Bill Morganfield doing vocals and guitar and Brian Bibesi and Bob Margolin also on guitar. Both Brian and Bob had honed their guitar skills playing with Muddy Waters. Tom "Mookie" Brill on bass, Chuck Cotton on drums and Clark Stern on keyboard create a fine blues band for Big Bill Morganfield. The addition of Steve Guyger, a great old school harmonica player, fills out this fine blues band.

"Born Lover", the title song for the cd, was written by William McKinley. The lyrics are all about the ups and downs off love for women. This song has a really Muddy Waters feel to it. Love can be good or it can be bad. Featured on "Born Lover" is Steve Guyger's harmonica style. Steve has the true depth and feeling of the Chicago blues style. This is one really good blues tune.

On "Gas Prices Too High", Bill ventures out to play two guitar parts. We are treated to some fine slide work and a catchy groove as we listen to Bill's lyrics about the high cost of gasoline in the U.S.A. Yes, the value of the dollar ain't what it used to be! This is an appropriate song for the times we live in.

"My Love Is Real", a Buddy Guy tune, brings out the mellow side of Big Bill. His vocal qualities stand out on the song. He also brings the feel of the lyrics of Buddy Guy to us. Also on this track the piano of Clark Stern stands out for our enjoyment. I really like the way Big Bill has done this tune.

"Born Lover" is twelve songs hitting all styles of the blues as felt by Big Bill Morganfield. He has become a true blues artist whom would make Muddy Water proud. He has paid tribute to his father as well as placed himself amongst the best of the blues players. What more can I say except that he has done a fine job on this music project.
Posted by Crossroads Blues Society at 5:16 PM