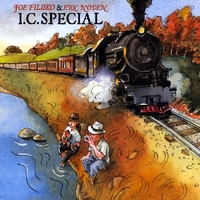 I.C. SpecialJoe Filisko & Eric Noden
Self Released
www.ericnoden.com/Filisko_Noden
www.cdbaby.com/cd/jfen
15 tracks/61:51
Joe Filisko & Eric Noden are paired up once again on I.C. Special (self released record label). This is their second CD together and they really complement each others acoustic blues style. Eric is a well schooled acoustic guitar player and Joe is a extremely talented harp player. They play all original tunes on this CD. All the songs sound and feel like they stepped right out of the hay day of the acoustic/folk blues in 1920's or 1930's.
The CD starts out with I.C. Special (title track). Its a song that really captures the sound and impression of riding the Illinois Central rail from the Delta to Chicago. Joe's harp closes the song with a grinding slow down of the massive locomotive coming to halt in the rail yards somewhere in Northern Illinois. Eric & Joe work their way to the next tune which is a song about modern time Gridlock Blues. Eric's slide work on his National resonator guitar and Joe's driving harp make this one of my favorites on the CD. On the fourth track Me & Sonny you genuinely get the feel of the easy going ambiance as Eric sings about traveling through out Europe with buddy Sonny Stovepipe a.k. Joe.
Joe and Eric trade off vocals on tracks as they take you through the songs of the CD. Their music covers angry woman, drinking too much, world traveling, breaking up and dieing. Each tune has its own unique sound and the CD flows from one subject to the next keeping the feel of the early times of the Blues going strong. One big difference from old blues recordings and this one is the great sound quality which allows you to hear all the intricate guitar and harp sounds clear as a bell. Its easy to get a sense of sitting on a old country porch and listening to the influences of all those great harp players with Sonny in their name.
The CD has a great feel to it and is a prime example of blues from the past living on today. Being only their second CD together Joe and Eric sound like seasoned touring veterans. They are truly the rail carriers of acoustic/folk blues of yester year and today.
Posted by Crossroads Blues Society at 5:36 PM