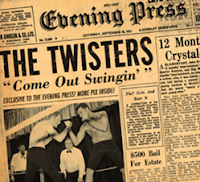 Those crazy Canucks! We’d better watch that border! Not only did these guys come out swinging, they came out with one of the most enjoyable CDs I’ve heard in awhile.

One first listen, I thought, pretty schizophrenic--it’s all OVER the place. Second and third listen revealed a VERY talented band that who CAN go from jump to blues to rockabilly to gospel to reggae (yeah, you heard me) to slow blues, and do it ALL well.

But it’s not just the music, it’s the songs! The lyrics are clever, cool, and avoid the pitfalls of many “entrenched” and better known blues acts. “Doghouse“ is hilarious and poignant for any man in a relationship. “I Refuse To Get Old” is, well, universal, shall we say, and done is a straightforward old time acoustic guitar and harmonica delivery. “Long Overdue,” “Something‘s Got To Give,” and “Guess That I Was Wrong” too, are Twisters takes on more common themes done as swing, blues, and rockabilly. Standout cuts for me were “Doghouse” because of the lyrics and delivery, “Take My Own Advice” which features chromatic harmonica over a reggae-influenced beat, and “Dirty Boy Blues” with its in-your-face Chicago-style guitar.

I can’t say enough about this band. Yes, they get a lot of help here, but they have chops, two unique vocalists, and some good songwriting going for them. You may have to search them out, but I would highly recommend this CD to blues, swing, rockabilly, and all listeners with a craving for some cool and new.
Posted by Crossroads Blues Society at 5:25 PM