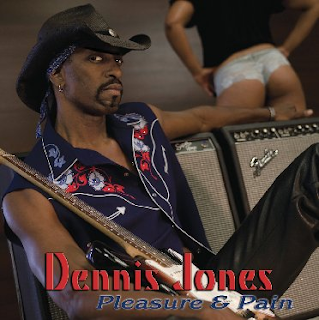 Dennis Jones is being promoted as the heir to the throne of guitar master once occupied by the likes of Jimi Hendrix and Stevie Ray Vaughan. On his latest release, he presents a convincing argument that such claims are not mere hype and hyperbole. The all-original program features Jones on guitar & lead vocals backed by Michael Turner on drums and Tony Ruiz on bass guitar.

Jones has an engaging vocal style, which is evident on the opening cut, “Brand New Day”. This hard-hitting shuffle features a horn section of Jimmy Z and Lee Thornburg and a fleet-fingered solo from Jones. “Don’t Worry About Me” veers into a rock mode with a heavy funk beat. Jones turns in a dynamic solo that establishes that he has plenty of skill on the guitar.

One highlight is “Kill the Pain”, featuring a crunching guitar riff that drives this tale of a woman caught in the downward spiral of substance abuse. Jones plays with such intensity that it seems like he is trying to use his guitar to exorcise the demons plaguing the song’s protagonist. The longest track, “Sunday Morning Rain”, is a ballad with an aching vocal from the leader. Jones lays down an a compelling guitar line over a driving rhythm on “Home Tonight” and burns through the straight-ahead rocker, “Try Not to Lie”. He ventures into the realm of social commentary on “I Want it Yesterday”, complete with another monster guitar riff and a concise, but intense, solo passage. The closing track, a tribute to “Hot Sauce”, gives Jones another opportunity to wring plenty of hot licks out of his guitar.

While Dennis Jones doesn’t offer anything you haven’t heard before, he injects every performance with energy and passion that grabs your attention. There is no question that he is a very talented guitar player. His vocals aren’t forced – he just sings the song and stays away from the vocal gymnastics that victimizes so many performers. This is one of those recordings that you’ll have a hard time taking off your CD or MP3 player.
Posted by Crossroads Blues Society at 8:03 AM