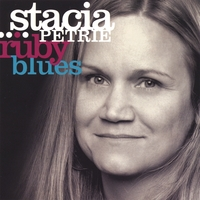 Few blues artists are household names across America anymore. BB King and Buddy Guy are two of the big names everyone can recognize. Blues fans know many of the names in the industry, but I know that Stacia Petrie is not a household name outside of Detroit area blues fans. After listening to her fourth self-released CD, I think that she should be! This album contains 11 tracks that she has either written alone or with another Detroit artist. They are solid songs that showcase both her vocals and song writing skills. She also does some more than adequate acoustic guitar work on the CD.

Her bio shows that she has been busy since 1993 with both individual performances and her work with the seven-woman band the Detroit Women. She is well known in the Detroit blues scene and has won nearly a dozen awards there in the last 7 years. And the song "Face the Blues" on this CD, which is a collaboration Motor City Josh, won first place in the blues category in the 2007 Unisong International Song Contest and third place in the 2007 Great Lakes Song Contest. I see why it won- it is a great slow blues tune with super vocals by Stacia and some nice lead guitar by Motor City Josh.

Her voice is expressive from the slow, breathy numbers all the way to the driving, rocking songs. She writes of love gone wrong in tracks like “Long, Cold, Lonely Night” and, well, almost of the songs on the CD. Her blues are deep and heart felt. She gives us music and lyrics that are gripping and touching. In “Detroit Women” reminds be a little of Joanna Connor as she blasts out how they’re “gonna shake this ground, and if you can’t take the shakin’ you better sit yourself right down.” The down and dirty lead guitar here is by Roscoe, who also engineered the album.

I was very impressed with this CD. Petrie is a fine songwriter and performer. It is unfortunate that her previous solo CDs and four CDs she cut with The Detroit Women have not gotten much play. If they are as good as this one we’ve been missing a lot of great music. She’s a very, very good vocalist and songwriter whom I recommend that you check out!
Posted by Crossroads Blues Society at 5:46 PM