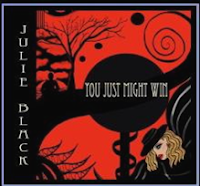 Julie Black is an up and coming vocalist with a mighty fine voice. In this, her second CD overall on BOJA records, we hear this gritty and powerful singer deliver the goods with 15 great original tracks to appreciate. A cut from her first album (“Love This Mama”) was featured on the final 2008 sampler CD from Blues Revue magazine. The CD also features guitarist Dave Eichenberger, Michael Johnn on keys, bassist "Father" Bill Spicuglia and “Jungle Denny” McCarthy and Mike LaSala sharing the drum work, along with a host of backing vocalists and Aaron Rutter on violin; they do a great job backing her up!

I liken her voice in some ways a bit to Bonnie Raitt, in others a bit to Janis Joplin, and in others even a bit to Ella and Etta, but she is uniquely herself in her singing and equally good songwriting. Some of the songs have for me a Carole King feeling of forthrightness and confidence in their approach to words and music, which is a huge compliment because as a 60’s and early 70’s songwriter there may have been few better. This is a great package that showcases a talented young gal’s talents!

She opens with a haunting “Under the Gun” with beautiful and sultry vocals and some sweet guitar backing her. She goes into the pensive and thoughtful “After Falling Out” after a great piano and guitar intro by Johnn and Eichenberger that shows the care these artists have for both the material and each other. If I had to pick a favorite it might be “Both of Us”; this is a gutsy and emotional cut that talks of relationships gone bad and just tears at the soul. Cutting vocals and guitar make this a great song. “Blues in My Blood” give us some gutsy vocals, guitar, piano and really nice organ work. She gets a bit whimsical in a duo of songs, first in an almost Lennon and McCartney-type way in “Cajun Coquette” and following that with a rockabilly country way with “If Love is Kind (Why You Tryin’ to Kill Me?)” (they are listed backwards on the CD from their play order). She closes in a jazzy number entitled “I Got Love” that is an outstanding punctuation mark to a wonderful set of tunes.

What a great CD we have here; jazzy, soulful, rocking, bluesy and oh, so special! I was really impressed with this effort and it got better and better after each play. Julie is the real deal and I think the blues and cross over world may hear a lot more from this fine artist! I give her songs, her voice, her band, her CD and her production the highest marks here- this is one you have to listen to!
Posted by Crossroads Blues Society at 7:03 PM