The Sojourners reviewed by Steve Jones 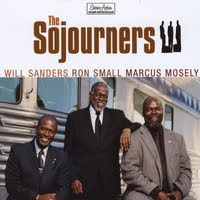 Canadian bluesman Jim Byrnes contacted the Vancouver-based Marcus Moseley to get some other Canadian singing friends together to work on an album about three years ago. When the three men opened their mouths it was obvious that something special had been put together. Mosley, along with buddies Will Sanders and Ron Small, refined their stuff in the churches down south in their original homes of Ralls, TX, Alexandria, LA and Chicago, IL, respectively after the Byrnes session and then recorded a 2007 CD with producer Steve Dawson. Their second CD was recorded two years later and is just released here; it features Dawson playing a smoking variety of guitars with a deep blues sound, a warm and soulful Mike Kalanj on Hammond B 3 organ, Geoff Hicks and Keith Lowe on drums and bass and a guest appearance by Jesse Zubot on mandolin in “By and By” to round out the wonderful sounds.

This is serious Gospel music sung by talented men with truly superb musicians backing them. These guys are standouts and have a sound and spirit that just beckons one to listen over and over again. The first time I listened to this was in my car, and when I got home I immediately listened to it three more times on my stereo; I was singing along with each track by the time I finished. It is moving music that grabs the listener with their exceptional renditions of songs of sin and redemption. They also weave in so many related styles of music to their Gospel and blues sound that makes it so beautiful that the listener cannot break away from it.

Dawson’s dirty and greasy slide guitar work is a wonderful addition to the Gospel sound. He’s featured in tracks like the jumping praise song “Great Day. If one has any ties to a military member, the Violinaires’ “Another Soldier Gone” is given a moving rendition that will just give you chills. “Lead Me Guide Me” is a Doris Akers classic that plays out like sacred slow blues, with the organ work and electric guitar filling in the blanks between vocals ever so sweetly. Los Lobos “(Peace in) The Neighborhood” brings us back to the headier days of the civil rights movement in a driving, forthright cover. The Reverend Guy Davis’ “Death Don’t Have No Mercy” gets a big transformation from its’ Grateful Dead cover days, poignantly melancholy yet moving. The set closes out with the traditional “By and By”; uplifting vocals and some mean finger picking on the guitar leave one revived but wanting more.

I can’t say enough good things about this. Suffice it to say that if I had to buy one Gospel CD released in the last few years, this would be it. It is that good. If you have any love at all for Gospel, this CD must be in your collection.
Posted by Crossroads Blues Society at 6:30 PM