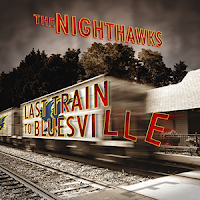 The latest from the Nighthawks is an acoustic recording done in 2009 at the Sirius/XM Studios and features founding members Mark Wenner on harp and Pete Ragusa on snare drum. They are joined by Paul Bell on guitar and Johnny Castle on bass. Both are veteran Washington D.C. musicians who have been in the band for the last four years. All four members contribute vocals to the project.

The stripped-down format works exceptionally well for the band, every track brimming with energy and superb musicianship. Opening with “The Chicken and the Hawk (Up Up and Away)”, Ragusa and Castle lay down a tight, swinging beat for Wenner’s enthusiastic vocal while Bell picks an intricate solo passage on his acoustic guitar. The rest of the setlist finds the band revisiting tracks from previous releases or covering classic songs like “Nineteen Years Old” with Wenner’s harp lines playing off Bell’s slide guitar. Their version of “Rollin’ and Tumbling’ “ harks back to Leroy Foster’s original with the moaning vocal chorus and insistent rhythm from Ragusa using a tambourine as a drum.

Another highlight is “I’ll Go Crazy”, with Ragusa taking the lead vocal on the James Brown tune and the rest of the band supplying a doo-wop vocal chorus. Wenner gets the chance to show off his skill on the harp and makes the most of the opportunity. The band shows they can rock unplugged with Castle on lead vocal for a rousing run-through of Chuck Berry’s “Thirty Days”. Bell contributes some more excellent slide work on “I Can’t Be Satisfied”. And Wenner blows his heart out on “Mighty Long Time”, adding an equally strong vocal.

The sound on this disc is superb, with the vocals having warmth and immediacy while the instruments are clearly defined. The band is inspired throughout and the members clearly revel in the acoustic format. After hearing Wenner’s stellar contributions on harp, one has to wonder why his name is not mentioned more often in discussions about the best harmonica players. All four members of the Nighthawks were on top of their game for this session, which ranks as one of the band’s finest efforts in it’s 35-plus year career.
Posted by Crossroads Blues Society at 6:57 PM