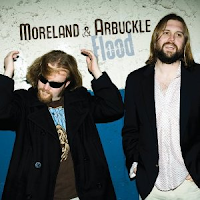 By my count this is the fourth album from these Kansans. Shame on me for missing the first three. If it weren’t for this CD popping up in the review rotation the same night I heard about a rave show at Kryptonite in Rockford, I might still be in the dark on these guys. The CD kicks off with a rockin’ cover of Little Walter’s “Hate To See You Go.“ Right from the get go, we get introduced to Aaron Moreland’s cigar box guitar/bass thingy. Open tuned, it allows Moreland to play bass and slide guitar at the same time creating a deep and eerie sound we would associate with the Deep South. Dustin Arbuckle sings, play harmonica and is given writing credit. Most songs here have drums added by Brad Horner. There is a sprinkling of guests adding a bass part here, guitar there, piano, but the heart of this disc is Moreland and Arbuckle.

This CD is not for the faint of heart. Song two is an almost over-the-top reading of “John Henry” that may make you forget about all other versions. Song three “Before The Flood,“ begins with some psyche sliding (my word) shenanigans before evolving into “18 Counties” something closer to a North Mississippi All Stars-type one chord jam. “Your Man Won’t Ever Know” is a slower and subtler acoustic guitar/harp story of infidelity. Song six, “Don’t Wake Me” is from the Elmore James school, although it starts with some nice honky-tonk piano. The lyrics and Arbuckle’s delivery keep this one from being filler. “Bound and Determined” is a poppy number featuring slide guitar and banjo that work well together. Before you get too comfortable, however, there are shades of the Jack White’s White Stripes off the radar playing here making the song less conventional that one would expect. “Can’t Get Clear” is another one chorder that is both hypnotic and deep. Imagine if R.L. Burnside had been white. Songs nine “Can’t Leave Well Enough Alone,“ penned by Ryan Taylor sounds more like traditional up country blues. Here, I should mention that M&A seems at home in many styles of acoustic blues styles. “In The Morning I’ll Be Gone” is another song that proves M&A can get along just fine without a full-time bass player. Another hypnotic romp. “What You Gonna Do” is almost “Got My Mojo Workin’” and I mean that with the most respect. Propelled by drums, piano and Moreland’s guitar the song reaches the same sort of hand-clapping fervor. Song twelve, “Red Moon Rising” is, again, a fooler that could have been written 80-90 years previous. The CD closes with a banjo version of song eight, “Can’t Get Clear.” I like albums that sort of fade away rather than just end; this reprise is a nice touch.

It is unique spanning styles from the 20 to now. It is hypnotic, evocative and well produced. In the hands of others one chord songs can wear on you. Moreland and Arbuckle have enough savvy and skill to avoid getting mired in their own a grooves. I will definitely seek out more Moreland (no pun) and Arbuckle. This disc may not be for everyone, but I really enjoyed it.
Posted by Crossroads Blues Society at 7:06 PM