For Rosa, Maeve and Noreen reviewed by David Stine 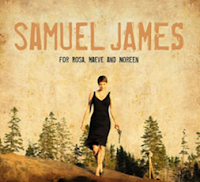 The reviews of James work are quick to compare him to old timers like Charlie Patton, Son House, and Lightnin’ Hopkins. James is an acoustic player of definite skill on guitar, banjo, harmonica and piano. Bedsides his finger-picking ability, James is a quirky and clever songwriter-something sorely missed in today’s blues market. Rather than the standard love lost, late night, bar room, lonely road story lines, James, as you can tell from the CD title, populates his blues with women with unusual names, plots that mention murder more than heartbreak, and titles that look like they’d introduce the next scene in a Quentin Tarantino film.

The CD kicks off with “Bigger, Blacker, Ben” (see what I mean?) the story of a KKK hanging gone wrong. Now here’s the rub for me with James: his voice. He sings/talks in the vein of, well, remember Leon Redbone? For some, his voice may be off-putting and make this fairly short CD seem longer than it really is. Charlie Patton had an unusual voice; so did Son House, but... James also tends to slur into little asides as he moves from one verse to another. In a live show, this would probably work better. The listener without the aid of headphones is going to miss a lot of this. I guess, you’ll either like it or not.

The CD stays pretty mid tempo until track 9-“Miss Noreen.” Moving from guitar to banjo, this song quickly became my favorite for its speed and novelty. Followed by the instrumental “Trouble on Congress Street Rag,“ I found the second half of the CD more satisfying. The songs had more variety, instrumentally, tempo- and theme-wise. Much has been said about James novel-like writing style and it seems the song order is more literary than the typical ebb and flow of most CDs. If you can hang until track 9, you’re in for a treat. Up to that point in time James has a tendency to sound repetitive, no matter how odd the lyrics.

What did I like about the CD? The songs are quirky and well played. What didn’t I like? James voice and the pace of the CD. With songs like “The Water’s Always Changin’ But The River,“ “I’ve Haddock Up To Here,” “A Sugar Smallhouse Valentine,” and “Darlin’ Maeve,” James is sure to catch the attention of many. His Northeastern landscape populated with killer women and danger is a nice alternative to blues from the southern climes. Does he blow Keb Mo’ out of the water (as stated in several online reviews)? No. Or Corey Harris or Alvin Youngblood Hart? No. Yet James is a new and clever voice and whether he gets best acoustic album or best acoustic performer, he will be around for awhile.
Posted by Crossroads Blues Society at 7:26 PM