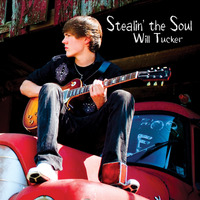 Stealin’ the Soul
Will Tucker
Will Tucker Music
www.willtuckermusic.com/
9 Tracks

Tommy Peters, the owner of B.B. King's Blues Club in Memphis discovered 16 year Will Tucker in 2008. Will has been following the blues scene around Memphis most of his life. Since being discovered in the summer of 2008, he has performed with several veteran bluesman including Charlie Musselwhite, G. Love & Special Sauce, Tony Coleman (B.B. King’s drummer), Billy Gibbons, and the Beach Boys with John Stamos. Collaborating with Grammy nominated producer Paul Speer and Ardent Studios he recently released his debut CD “Stealin’ the Soul”.

“Your Sacrifice”, his original tune on the cd, is proof that his song writing equals his guitar playing ability. At the early age of 16, Tucker plays guitar like a 20 year veteran.

He covers titles like Muddy Water’s “Walkin' In The Park”, the Willie Cobbs, Elias McDanial tune “You Don’t Love Me”, “T-bone” Walker’s “Stormy Monday”, and the Booker T. Jones hit “Born Under a Bad Sign”.

The last segment of the cd is live from B.B. King’s with his own band and Memphis musicians Joe Boogie on keyboards, Randy Middleton on bass, and Pete Mendillo on drums. He opens with the Dennis Linde hit “Burnin’ Love”, continues with the Memphis Minnie and Joe McCoy tune “When the Levee Breaks”, and finishes the four tracks with a strong version of Chuck Berry’s “Johnny Be Goode” and the Jimi Hendrix guitar classic “Little Wing”.

After listening to this, his first CD, I think you will agree that it sounds like Will’s guitar experience far exceeds his age. His voice has also developed to a maturity level well past the age of 16. I think we will hear more and more from this young guitar prodigy for years to come. As a blues fan, it is great to see young artists so dedicated to the music that has influenced generations.
Posted by Crossroads Blues Society at 6:55 PM