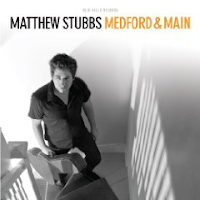 A new soul and blues instrumental pioneer has arrived on the scene. At 25, Matthew Stubbs is currently sharing the stage with the Charlie Musselwhite band and well as performing with his own band. He has just finished the follow up to his debut album "Soul Bender" with the new CD "Medford and Main". As a composer and performer, Matthew is known as a well established blues and soul instrumentalist. Along with touring with Charlie Musselwhite, Stubbs has also toured and recorded with many top blues and soul acts such as Junior Watson, John Nemeth, Janiva Magness, Lynwood Slim, Brian Templeton, and Sax Gordon.

Stubbs opens "Medford and Main" with the soul explosion and title track "Medford & Main" and follows up with "Pistol Whip" echoing the 60's surf and rock era. "Uncle Sonny" opens with Matt's original guitar sound blended with an all-star horn section headed by Sax Gordon. He slows thing down the soulful tune "Sleepy Eyes" showing his versatility. Combine the versatility of the late Danny Gatton on guitar and the Memphis horns and you have a sound much like Matthew Stubbs has created with the next tune "Double N". He keeps that unique soulful influence with "Tube Top Temptation" and "Yikes Ike". Stubbs once again slows the tempo down on the tune "Mangos". "Waffles" with its great trumpet intro and "Rug Burn" really showcase the guitar of Matthew Stubbs and his explosive soul band. The CD is concludes with a rockin' soul number "Fazzo Beans".

What a great follow up to his debut album! An original instrumental album of this caliber has finally hits the charts. With the guitar prowess of Matthew Stubbs and a band to match, he has set the standards very high for the future of the music industry.
Posted by Crossroads Blues Society at 7:13 PM