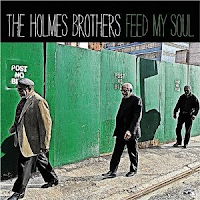 On their tenth recording and the fourth for Alligator, the Holmes Bothers continue their winning formula of mixing their influences - gospel, soul, blues, rock and country - into another collection brimming with spirit and energy. Unlike previous efforts, this one features a wealth of original tunes - two by Sherman Holmes and six from his brother Wendell, who also co-wrote one track with Paul Kahn. The burst of creativity stems from Wendell’s recent bout with bladder cancer, which gave the siblings a new appreciation for life. They are joined, as always, by drummer Popsy Dixon and their friend, Joan Osborne, handles the producer’s role as well as adding backing vocals on seven tracks. Another long-time collaborator, Glenn Patscha, is prominently featured on keyboards.

The disc opens with “Dark Cloud”, with Sherman’s pleading vocal over his strong bass line and some tasty Hammond organ from Patscha. The social commentary continues on one of Wendell’s tunes, “Edge of the Ledge”, as he attempts to make sense out of a financial situation so dire, “..they even repossessed my bed.” “You’re the Kind of Trouble” rocks hard and Wendell’s lead vocal gets plenty of support with Osborne and Catherine Russell on backing vocals.

Switching from guitar to piano, Wendell delivers a poignant look at his battle with cancer and the reaction of people in his life on “Fair Weather Friend” with Sherman, Popsy and Osborne laying down an exquisite backing vocal . The band dips into the Beatles catalog one more time, with Popsy’s soaring falsetto voice reworking “I’ll Be Back” into a yearning lament on love lost that achieves an emotional level that surpasses the original. Another cover, “Pledging My Love”, features more of the band’s superb singing, the three voices harmonizing in superb fashion. Wendell shares some sage advice on life on the country-tinged “”Living Well is the Best Revenge”.

“Feed My Soul “ is a song Wendell wrote for his wife, a gentle love song with a gospel flavor. Brother Sherman wrote an equally touching piece, “I Saw Your Face”, with a beautiful guitar solo from Wendell .

Popsy closes the disc by taking listeners to church on “Take Me Away”, his stately voice lifting up the song of praise in magnificent fashion, accompanied by Wendell on piano.

Long-time fans will delight in the stunning vocalizing from Wendell, Sherman and Popsy throughout this release. Kudos to producer Osborne for capturing their voices in all of their glory. The band celebrates life, love and family with a renewed sense of purpose and outlook on life. You can hear it in the lyrics - and in their heart-felt singing. This is certainly one of the Holmes Brothers best recordings - and a joy from start to finish.
Posted by Crossroads Blues Society at 7:21 PM