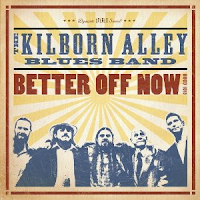 It is rare for a blues band to get much attention at the beginning of their career. Many blues musicians have to pay their dues, following a steady career arc that eventually earns them some level attention from the buying public, magazines and cd reviewers. Kilborn Alley managed to get a steady stream of acclaim right from the start, marked by their first two releases receiving nominations for Blues Music awards. The group also received the “Sean Costello Rising Star Award” at the Blues Blast awards ceremony last October. With their newest project, the band serves notice that they have honed their ensemble playing and original tunes into a tighter, tougher sound that melds the traditional electric blues tradition with the realities of the modern urban environment.

The band draws it’s strength from several sources. Andrew Duncanson’s gritty voice can tear into the low-down shuffles or shout out with heart-breaking intensity on the soulful ballads. Joe Asselin is an inventive harp player with a huge sound. The twin guitar partnership of Duncanson and Josh Stimmel brings a razor-sharp edge to every track while Chris Breen on bass and Ed O’Hara on drums are the rock-solid foundation that fuels the band’s propulsive sound. The group used a collaborative approach to writing nine of the cuts, with help on three of them from their original drummer, Anthony Decerbo.

The disc opens with “Nuthin’ Left to Stimulate”, an indictment of the current financial situation set to driving beat with Asselin’s wailing harp driving the point home. The band finishes the disc with a bruising version of John Brim’s classic “Tough Times” with Nick Moss on guitar and Gerry Hundt sitting in on drums. In between those bookends, Kilborn Alley delivers one highlight after another , whether it’s Duncanson ‘s gripping warning about “Foolsville” or the funky strut of “Train to Memphis”. Moss wrote “Watch It”, featuring a surging rhythmic thrust plus the taut interplay between the guitars of Stimmel and Duncanson. The instrumental ‘Bubbleguts” offers a change of pace, driven by the roller-rink sound of Gerry Hundt’s Farfisa organ.

The title track is one of Duncanson’s finest moments. He delivers his vocal with the fervor of the classic soul singers, pushing his voice to the breaking point at the end as he testifies with unrestrained passion. Moss adds his guitar and Ed Michaels sets the mood on organ. Michaels swirling organ is featured prominently on “Tonight”, a late-night lament to too many nights away from home. Duncanson shines again on the harrowing slow blues “Keep Me Hangin’ “, the intensity of his performance matched by Asselin’s mournful harp and Stimmel’s jagged guitar lines.

There is no doubt that this recording will continue to bring well-deserved attention and praise to this outstanding aggregation. Kilborn Alley has managed to integrate all of fine traits of modern electric blues into their sound while avoiding the pitfalls of endless solos and tiresome boogie beats. You shouldn’t be surprised to see this recording nominated for a blues Music award next year - and here’s hoping that they finally win one. In the meantime, this is one release that you can’t afford to miss. Highly recommended !!!
Posted by Crossroads Blues Society at 7:32 PM