Hell and Back reviewed by David Stine 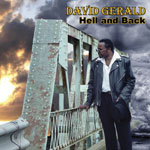 Evidently Stevie Ray Vaughan still casts a might big shadow over blues men of all color. David Gerald’s Hell and Back oozes with Vaughnisms. I should have noted how much the CD cover resembles Vaughan’s Couldn’t Stand The Weather. For those of you, who back in the day whished Stevie had covered “Red House,“ you’re in for a surprise on track 10.

This ten-song CD captures Gerald both live and in the studio. The live tracks tend to be more raucous and over-the-top. Also, the live stuff is all cover material. “I’ll Play The Blues For You,“ Thrill Is Gone,“ “She Caught The Katy,“ “Cold Shot,“ and “Red House” are all covered here by Gerald and his band. The Albert King cover nods both the King and his best disciple, SRV. “Thrill Is Gone” starts out as a subtle B.B. version with keys playing the part of the string section but blasts off about halfway into it with Gerald’s Stratrotechnics (my term). The crowd eats it up. “She Caught The Katy” is treated to an up-tempo and pleasant modernization. “Cold Shot” is almost note-for-note Stevie. And here’s the little secret: Gerald SINGS just like Stevie. He has an uncanny knack for mimicking Vaughan’s vocals. Check out the last song, “Red House,” which guitar-wise isn’t all Stevie but the vocals sure are. Eerie.

Before you dismiss Gerald as just another guy with a Strat (and sometimes a hat-see CD art), you need to hear the non-live songs, written by Gerald. Here is his future. Song one on the CD is a fairly non-memorable tune called “My Guitar.“ The theme and the playing don’t stand out, but provides a foundation to see were Gerald is coming from. He has been making a living as a guitar player who sings and now writes. Hidden behind the I-wanna-be-just-like Stevie is an artist trying to break out and find his voice. With “How I Feel” we hear an unrecorded SRV tune--not really but you’ll believe it. It DRIPS with scary Vauhanisms. Don’t give up yet, reader. “Postman” the third Gerald-penned tune exposes a bit more of David Gerald and a bit less of his hero. Not much, but enough. The next song “Hell and Back,“ my favorite on the disc is pure Gerald. Gone are the Stevie Ray trappings--vocally and guitar wise. This song alone pulls David Gerald out of the sound-alike and wannbe pile of copycats. Here is a good song, well delivered, and one that will stay with the listener as long as some lesser known Vaughan.

My end complaint is that David Gerald needs to come out from behind Stevie Ray Vaughan’s shadow and do his own thing. He has proved, here and there, on this CD that he has his own voice and talent. I look forward to his next disc.
Posted by Crossroads Blues Society at 7:18 PM