I94 Blues reviewed by Steve Jones 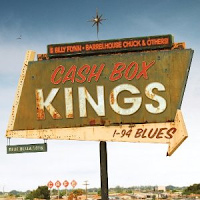 I met up with harp player and vocalist Joe Nosek from the Cashbox Kings last year and told him how much I enjoyed their 2009 “Cuttin’ Heads: Live” CD and he told me if I liked that then to just wait for their new studio release in 2010. Well, it’s here and he was right: it’s even better than their live release!

The CD is filled with 15 of the 17 tracks that the band laid down in a single day at Madison’s Smart Studios. Recorded mostly live (there are a few vocal overdubs and an added guitar track in one cut), it is the band's first release without Travis Koopman. Filling in here on guitar are Joel Paterson, Billy Flynn, and, on one track, Chicago veteran Steve Freund. Paterson takes the lead on most tracks with Flynn on the remaining except for the one by Freund. Flynn also fills in on mandolin and banjo on a half dozen tracks. Remaining with the band along with Joe Nosek are Kenny “Beedy Eyes” Smith on drums, Oscar Wilson (who shares the vocal work), and Chris “CB” Boeger on bass. Other welcome guests are Barrelhouse Chuck on piano, Mark Haines on drums and acoustic guitar, and Jimmy Sutton on upright bass and also backing vocals on one track.

The CD begins with a jumping, post recession cut called “Default Boogie”. The song gives us the blues delivered up with some appropriate lyrics about today’s economic times. Here Wilson bemoans the bank action against him:
“Before I could move
They changed the locks
They even took the check
Outta my mailbox...”
Flynn on mandolin and Chuck on piano give this a great depth of sound. It’s a great start to a CD with 10 solid tracks written by the band and their guests along with 5 great covers. They slow it down on St. Paul Wintertime Blues, with Nosek comparing the St. Paul winters to the cold in his bedroom. Paterson’s guitar lays down a solid lead line that drives this from start to finish. Flynn’s banjo leads on the title track with a nice acoustic guitar solo and fill in by Joel, more solid vocals by Nosek, Jimmy Sutton on bass, and piano by Barrelhouse Chuck. We are transformed back to juke joint days with this cleaver original tune; it’s one of my favorites. “Quesadilla Boogie” is another of my faves from the album. Penned by most of the band members, it opens with a great Barrelhouse piano solo lead in, and then we are treated to the full instrumental boogie treatment. Paterson’s guitar, Flynn’s mandolin, Nosek’s harp, Boeger’s bass and Smith’s skin work are tight and flowing. Flynn’s “Second Chance” gives us some more great slow blues, with Wilson back fronting the band and Freund in the lead and Flynn backing him on guitar.

The covers also include some very strong songs. Muddy’s “Hard Days” gets royal treatment here with Wilson’s smooth vocalization, Chuck tearing up the keys, Flynn’s lead mandolin and Nosek blowing hot harp. Water’s “Country Boy” cover slows it down and gets all greasy and dirty with the same cast, except Paterson twists notes away on lead guitar and Flynn adding his banjo. Two Muddy Waters covers you hear from so many bands, yet here we get them played almost reverently and ever-so-freshly! The surprising cover is Jim Croce’s “Don’t Mess Around With Jim”, an over played 1972 pop number that used to bore me to tears but here it gets a complete facelift. The song is done with a slightly up-tempo, syncopated beat, some sweet guitar from Paterson and nice vocals by Wilson. These guys can take pre-chewed bubble gum and turn it into brand new and clean gum! They finish the set with Blind Willie McTell’s “Warm It Up to Me”. Sutton backs Nosek up on vocals quite nicely, and the band builds this acoustic number up to a rousing finish that perfectly closes things.

Space precludes me mentioning every cut, but suffice it to say that you will love them all! These guys play Chicago blues the way they were meant to be played. The Cashbox Kings and their friends are in synch and play together with reckless abandon. This is a great album and it needs to be part of your collection if you want to hear the best of today’s Chicago blues!
Posted by Crossroads Blues Society at 7:08 PM