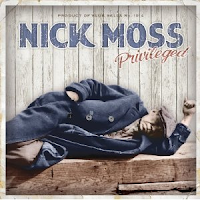 Nick Moss appears to be an angry man. He’s given us an emotional and quite different take on his talents in this brand-new release. Politically charged, the album bristles of the tension of the late 1960’s. Moss’ distaste for current politics shines through, and he takes this anger and amplifies it angry and bitter songs of our society and lost loves.

Nick sets the tone for this album with a very angry cut about a “Born Leader” whose goal is to lead all us blind little lambs. It’s a driving rock song with nice lyrics, appropriately coarse vocals and a hot hand on guitar. There’s a really sweet guitar solo by Nick in the middle of this one. A few tracks later he gives us another dark and original track called “Privileged at Birth”; here he talks to us about what life is really all about and worth. Moss has another big solo here, as does John Kattke on organ. Moss covers the Cream classic “Politician” to add to his political commentary. It’s a bit darker than the Bruce and Clapton version, but it’s also filled with a lot more emotion than the super group original. Nicely done! The original “Tear Him Down” describes how we love our cultural heroes when they do well but we enjoy it even more when they mess up and we can tear them down. Stephen Still’s “For What It’s Worth” is a very cool cover. Moss gives the song a big funky sound doing all the guitar work while Bob Carter growls out the lyrics. “Why Should I Care” completes the social and political commentary; here Moss talks to us about losing everything we have in this new song. This is a hard driving, rocking cut.

On “Your Love’s a Lie” we get Nick in his angry mode again, singing slow blues about his lover’s lies. The “perkiest” tracks here are Howlin’ Wolf’s “Louise” and Sonny Boy Williamson’s “She’s So Fine (Born Blind). “Louise” is done in a jumping, rocking style with Moss’ solid guitar blazing a sweet path while

Moss goes acoustic on “Georgia Redsnake”. On “Redsnake” he does all the acoustic guitar work while Gerry Hundt adds some very well done mandolin. It is a driving and vibrant song. They finish up the CD with a funky instrumental called “Bolognius Funk”.

This CD is more rock than straight blues, but it gives us a great appreciation of how in the early days that blues got transformed into rock. Moss’ work here verges on genius, giving us an emotional and dark look at our world. The guitar is impeccable– no one out there can beat this man at his craft. The notes effortlessly flow off his frets into his pickups/mikes. When this is released for sale I am buying my own copy. If you like rock done in a dark and bluesy style, you’re gonna love this one!
Posted by Crossroads Blues Society at 7:24 PM