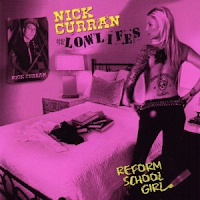 Nick Curran has been labeled as a "twenty-first century hybrid of Little Richard and T-Bone Walker". Curran has recreated that early sound of the classic, exciting, dawn of the rock 'n' roll era of the 50's into his own tunes. With the use of special recording equipment and live one take recordings, he has captured the "spirit" of a bygone era in music history. He grew up in Portland Maine and at age of 15 he played with his dad's blues band Mike Curran and the Tremors. At the age of 18 Curran was playing in a local rockabilly band when he met the legendary Ronnie Dawson. He began his first national tour with Dawson's band as a guitar ace. When the tour ended, he joined the Texas rockabilly queen Kim Lenz as a guitar player in her backup band the Jaguars. When he wasn't on the road, he played in the Dallas-Fort Worth area with local blues bands.

Curran focused on the blues scene in the Dallas area and roots music in Austin. He even toured with retro-country sensation Wayne Hancock for a short time. Being a long time admirer of Duke Robillard and Roomful of Blues, he had his sites set on forming a similar band. In 1999 he moved from the rockabilly scene and start concentrating on blues and writing his own material. He recorded his debut album, Fixin' Your Head, on the Texas Jamboree label. He followed up with cds Nitelife Boogie and Dr. Velvet.

After he performed a solo show in November, 2008, Nick formed the rock 'n' roll roots band, The Lowlifes. Reform School Girl, his latest cd, has all of the excitement of early rock 'n' roll era with Texas blues and rockabilly guitar typical of Nick's style. He opens with an Etta James, Joe Josea rock 'n' roll explosion "Tough Lover". Curran really rocks, rolls, and shakes on "Reel Rock Party" Chuck Berry style with Jason Ricci on Harmonica. The title track "Reform School Girl" takes us back those days of groups like the Shangri-Las. Curran's guitar style and retro vocals really rock on "Kill My Baby" and "Psycho". Tunes "Sheena's Back", "The Lowlife", and "Baby You Crazy" capture the essence of Little Richard's vocals with backup harmonizing vocals and rockin' guitar licks to match. Curran's guitar and Billy Horton's bass are a perfect match on "Ain't No Good". Curran switches completely to a dramatic soulful voice in the blues number "Dream Girl". Nick is joined by The Blaster's Phil Alvin in the rockin' duo "Flyin' Blind". Curran returns to the Little Richard style vocals joined with Derek Bossanova's piano style to match on "Lusty Lil Lucy" and "Filthy". Reform School Girl concludes the way it started with the wild, explosive guitar and rockin' vocals Curran does so well in the B. Scott, M. Young, A. Young tune "Rocker".

Join Nick Curran as he rocks and reels his way through this electrified collection of contemporary 50's sounding rock 'n' roll tunes that is simply irresistible.
Posted by Crossroads Blues Society at 7:30 PM