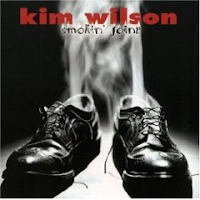 Blues music doesn’t get much better than catching Kim Wilson live, backed by one of his aggregations of all-star blues musicians. This live recording captures Wilson in his element, his commanding lead vocals and virtuoso harmonica playing constantly eliciting shouts of approval and encouragement from the audience. Wilson favors a two guitar line-up and you don’t get a much better pairing than Billy Flynn and Rusty Zinn. The interplay between these two masters is a constant delight, particularly on a rousing rendition of “Gumbo Blues”. Larry Taylor on bass (Canned Heat) and Richard Innes on drums form the rhythmic engine that powers this high-octane blues machine.

This collection of veteran musicians form a powerful ensemble that pushes Wilson to be at his best. And he delivers, whether it’s blowing a stellar harp solo to open “Take a Little Walk With Me” or shouting the blues on “I’m Leavin’ You”. The up-tempo “Date Bait” is another high point with it’s churning rhythm and an expressive vocal from the leader. The band slows the pace on “Please Come Back to Me” and Wilson turns in another convincing lead vocal performance while the two guitarists create plenty of six-string fireworks.

“I’m Going Home” is done in the swinging west-coast style with Zinn tearing it up on guitar. The closing medley starts with a high energy version of “I Hear You Knockin’ “ before easing into “Bring It On Home” with Wilson’s harp echoing his vocal lines.

The recording quality and volume vary a bit from track to track but the sound on all of the cuts is quite listenable. The sleeve lacks any notes save for the lists of song titles and the band members. But the disc rocks from start to finish and provides another testimonial to the power of Kim Wilson’s musical vision. The crowd that packed Big Cities at Wilson’s recent local show certainly had a experience that was similar to the inspired performances captured on this disc. Available at Wilson’s live shows, this one is worth tracking down. Just make sure you invite your friends and play it loud !!!
Posted by Crossroads Blues Society at 6:51 PM