On 80 Highway reviewed by Mark Thomspon 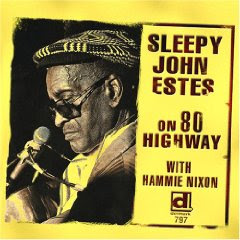 This disc captures a previously unreleased session from 1974 featuring two giants of the country blues genre. Sleepy John Estes is a name that should be familiar to most blues fans. His plaintive, high-pitched vocals consistently capture the emotions expressed in the variety of material covered on the disc. His guitar lays down a steady rhythmic foundation on each cut. Nixon may not be a household name but he repeatedly demonstrates his unerring skill on the harmonica. His uncluttered lines dance around Estes’ vocal work, delighting listeners with his imaginative playing.

The duo cover a variety of music ranging from blues to gospel and several songs with strong association to New Orleans. They trade vocals on “When the Saints Go Marching In”, and Estes breathes life into “Corrine Corrina” with his energetic singing, which is one of two cuts that highlight Nixon’s delightful use of the kazoo. The pair continue to share the vocals on two gospel classics – “Holy Spirit” and “Do Lord Remember Me.”

Other highlights include two takes of “President Kennedy”, a somber meditation that reveals the kind of power and emotion that Estes could capture in a performance. Nixon takes the lead on “Potatoe Diggin’ Man”. His deep, powerful vocal demands your attention. The disc closes with an Estes composition, “Brownsville Blues”, that features a spirited vocal from the composer.

At the time this session was recorded, Estes and Nixon had been musical partners for over thirty-five years. The relaxed, easy-going feel of the session is due to their familiarity with each other, as evidenced on two short tracks with the two doing some verbal sparring. There is plenty to enjoy on this disc, especially Hammie Nixon’s outstanding harmonica work.
Posted by Crossroads Blues Society at 4:14 PM