Gateway to the Blues by Steve Jones 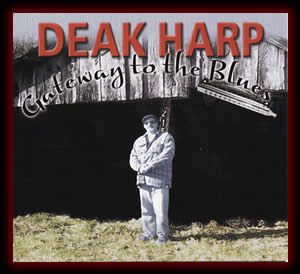 I got this CD to review and had some poorly preconceived notions that needed to be dispelled. I first ran into Deak Harp at this year’s Mississippi Valley Blues Festival in front of the Big City Blues Magazine tent. In between sets at the main stage, Deak was blasting out the same short set over and over for two days near our tent. He overpowered an underpowered amp and was playing some really distorted licks. A couple of the sets overlapped the real entertainment for a few minutes, which concerned me a little. But I said to myself, “He’s a guy trying to make a living. Leave it be,” so I did. After all, the music was pretty much ok from what I made out between distorted licks and I had been forced to listen to it about 25 times.

So when I was given this CD to review I may have had somewhat low expectations. Then when I first played the CD I thought it was just a lot more harmonica overload. The first eight cuts are train sounds and instrumentals of traditional songs and harmonica work. Nice, but nothing really new . Then the title track came on and things changed.

This was the first track with the whole band really playing as band. I enjoyed this song immensely. It was a slow blues instrumental. Very traditional but nice. Deak’s harp punctuated well and carried the song, but the entire band was together and it came off well. So now I was intrigued.

The next song was a shuffle entitled “Yea My Baby”. I was further sold because of the really mean harp Deak played here. Must have been that “black cat bone” his baby had in the song.

The track “Moving Soon” feature some great lead guitar work– I was quite impressed. “Midnight Blues” is a nice, long slow instrumental and a more up tempo “Big Fat Mama” also sounded great.

All in all this is a good little CD. I had trepidation and the first 8 cuts got me a little harmonica overloaded, but they were well done as were the band’s 10 tracks of solid blues following them. This is a fairly nice little CD that harmonica lovers will really enjoy and general blues lovers should find something to enjoy, too.
Posted by Crossroads Blues Society at 4:01 PM