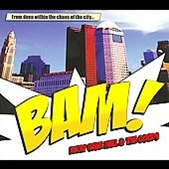 As with most CDs, I gave this one a quick once through. I must admit that the first time that I played the CD I thought that it had too much of a familiar feel to it that left me somewhat disinterested. So I sat down and seriously listened to it again. And then again and again I listened to it. The familiar became a bit intriguing and all of a sudden I think I was sold on it. I can’t say this is the best blues rock CD I’ve ever heard, but these guys from Ohio are really some no frills musicians who can deliver the goods.

Nine new tracks penned by Hall adorn this album and showcase his songwriting skills along with the three covers. You won’t find anything really new in the sound, vocals or playing, but they play and sing with determination and really get into it.

The style is straight up electric blues with a little funk blended in. Ricky writes and plays in a retro way that reminds me of 70’s rock. The blues meet the highways and byways of Ohio and give us a mostly driving and moving set of tunes that grow on the listener.

I’d not heard of Ricky and this band but he now has four CDs under his belt. Hall shows us that the blues are alive and kicking in the Buckeye State. I recommend this CD for anyone looking to hear traditional, electrified, funky blues delivered in a fresh and clean style.
Posted by Crossroads Blues Society at 6:30 PM