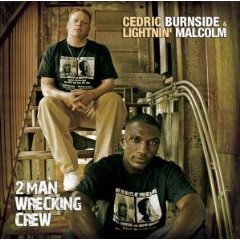 2 Man Wrecking Crew
Cedric Burnside & Lightnin’ Malcolm
Delta Groove Music
www.myspace.com/jukejointduo
14 tracks/48:17
While walking around on Saturday afternoon during this year’s Chicago Blues Fest, I heard lots of raucous sounds coming from the Mississippi Juke Joint stage. What I heard was the elemental blues of drummer Cedric Burnside and his pal, guitarist Lightnin’ Malcolm. The duo laid down an intoxicating musical mix that was heavy on the Mississippi hill country blues with bits of hip-hop and funk. It was music that demanded a reaction from your body. Their set was the most exciting performance I heard that day.
Their first Delta Groove release captures much of the spirit and grooves of that live performance. Cedric, the grandson of famed bluesman R.L. Burnside, can be counted on for a driving beat and soulful vocals. The disc opens with his heartfelt tribute to his late grandfather. Malcolm shares in the lead vocal chores. He echoes the drumbeat on his guitar, laying down a dense, thick sound with trance-like qualities. Combine the two and you end up with music brimming with pulsating rhythms that refuse to let go. On three tracks, the duo shift roles with Burnside on acoustic guitar while Malcolm takes over the drum kit.
“Fightin’ “ features an incessant beat from Burnside while Malcolm makes liberal use of his effects pedals to push his guitar into overdrive. Burnside turns in an appropriately angry vocal on “Mad Man Blues”, a tale of cheating love that features Jason Ricci on harmonica. Ricci appears on two other tracks, with his harp work really establishing the mood on the quiet country blues track, “She’s Got Something on Me”. Bekka Bramlett and Etta Britt add exquisite backing vocals on this track and four others. “Don‘t Just Sing About the Blues” also has a driving rhythm that would fill the dance floor in any juke joint in the country.
This seemingly simple music requires real skill to execute properly. Burnside and Malcolm grew up surrounded by some of the best blues musicians in the delta. They studied with the masters and now offer up their own version, extending and modernizing the blues tradition without sacrificing their roots. Give this one a few listens - it really grows on you !!!
Posted by Crossroads Blues Society at 4:07 PM