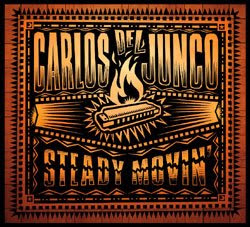 Carlos del Junco’s new release, Steady Movin’, is a very interesting CD. To me, it not only showcases his mastery of the harmonica but also takes the blues to a new level. To blues “purist”, I suppose, to go somewhere else with the blues is just not right. Well to keep the blues alive, in this era of electronic music, we must accept some change. Carlo does present a good step forward for the blues with this CD.

Carlos’ band lineup on this recording is one tight music machine! It is very apparent that his harmonica is the controlling instrument on this project. Do not overlook Kevin Breit’s guitar and banjo riffs and solos. Everythinng that he does is a compliment to Carlos on the harmonica. This is really good stuff.

Jorn Juul Anderson on drums and percussion adds a Latin feel to the music. Add Marc Rogers, on the bass, Denis Kaldie, on keyboards, Matt Brubeck on cello and we have a very enjoyable band to listen to.

With the first tune named “Diddle It”, and the last tune named “Doodle It”, what more can look for in this cd. These two tracks are really well done instrumentals that showcase Carlos on the harmonica. “Diddle It” is a boogie woogie type tune with really good keyboard lines and heavy bass backing. With Carlos capable of doing overblow style harmonica playing, the harp takes on the chromatic sound on the diatonic harmonica. His Howard Levy influence is very apparent on this track.

On “Mashed Potatoes Canada”, attribute to the Godfather of Soul”, John Dickie takes over the vocals. This is a really funky tune.

“Movin’ Down The River Rhine”, a Sonny Boy Williamson tune, to me, brings out the Paul Butterfield influence in Carlos. This is a barebones harp, vocal tune. This is an example of the real blues.

“Paridise” is a great tune with to me a Ry Cooder Latin influence. Kevin Briet does really nice guitar work on this one. Add Carlos on vocals and we have a great tune.

Carlos’ rendition of the Howard Levy inspired version of “Amazing Grace” is just that. Amazing and unique is my description of this tune. Shut your eyes and imagine where this track is going. This is harp playing with a stretched imagination. It is a great piece of work to listen to.

If Carlo del Junco’s “Steady Movin’ is an example of where the blues is going I will take the ride.
Posted by Crossroads Blues Society at 3:51 PM