Live At The Cadillac Club reviewed by David Stine 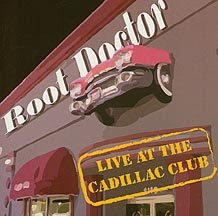 Shame on me for not knowing about Root Doctor! I am a big fan of “soul blues” and gospel, and Root Doctor’s live CD is a delight. If I did the correct math, this live CD is number three for the band who hail from Lansing, Michigan. Fronted by Freddie Cunningham on vocals, Root Doctor also is blessed with backup vocalists who harmonize so sweetly that you want to say “amen.” Don’t get me wrong: this is NOT a gospel album. It’s funky, slinky, and cool. If you like Syl Johnson, Earl Gaines, Roscoe Shelton (yeah, Artie White, Z.Z. Hill . . .) and others in this genre, you’ll like Root Doctor. Comprising Rick Bole on drums, Greg Nagy on guitar, Jim Alfredson on keyboards, and James Williams on bass, the band kicks off with Booker T and the Mug’s “Hip Hug Her.” At 6:09, this tune runs a bit long. If you were in the audience, you probably didn’t notice, but there just isn’t enough going on to carry this opening instrumental. Song two, Teddy Morgan’s “Walkin’ Out On You,” was a nice surprise. RD take the stripped down original and make it their own. This introduction to Freddie Cunningham‘s vocals, along with Nagy’s tasty guitar playing, had me smiling. There are three band-penned tunes on the CD, my favorite being “Been A Long Time Coming” that captured my favorite-of-the-CD spot. When put up against Tony Joe White’s “Rainy Night In Georgia” and Sam Mosley and Robert A. Johnson’s “It’s Too Late To Try And Do Right” (the only slow blues on the CD), this is saying a lot. Johnson and company do admirable jobs with both aforementioned--I liked the self-penned one a bit better. I was slightly let down by Greg Nagy’s reading of Lowell Folsom’s “Reconsider Baby.” Vocally, you could tell Nagy’s been singing with black guys for awhile: he can soulfully float a tone and “gut up” his notes. What let me down, however, was the too-long guitar solo in the middle of the song. Tortured goes to torturous pretty quickly. At 7:40 (yes, I remember this was cut live), half this length could have delivered the goods in my opinion. The album end’s with Larry Graham’s “The Turning Point.” Despite some minor “length” issues, I was sold on Root Doctor and their groove-oriented read of the R&B side of the blues. The addition of the Motor City Horns accentuates the band without distracting; as do the tight back up vocals provided by bassist Williams, keyboardist Alfredson, and guitarist Nagy. This is a band worthy of pursuing, in my estimation: not strictly blues, but a very enjoyable experience! I will be checking out their previous CDs.
Posted by Crossroads Blues Society at 3:56 PM