Whistling in the Dark reviewed by Mark Thompson 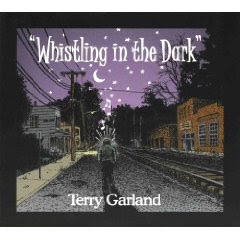 This 2006 release is the fifth from singer/songwriter/guitarist Terry Garland. It features nine original songs and two others that he had a hand in writing. Garland works the traditional themes of love, booze, current events and religion while displaying a knack for injecting subtle humor and fresh perspectives into the proceedings. He has a voice with some rough edges to it that fits the material quite well.

Garland is also an accomplished slide guitar player, particularly on “Hard Luck Blues”, which was recorded live in the studio. Terry lays down a driving guitar pattern to support his earnest vocal. That track is followed by the somber “Too Much Blood”, with Garland expressing his disgust with all of the violence in the world. Butch Taylor contributes some fine piano work in support. “Jim Beam & the Bible” describes the struggle between whiskey and salvation to a ringing guitar chord.

“Stumbling in the Dark” contains a frenzied guitar part that echoes the lyrical pondering of the gloom in the approaching darkness. But Garland can have fun as well, cranking up the tempo and fervently singing about his “Vacation Due”. He slows the pace down on the pretty ballad “Without You” that features some more outstanding piano, this time from Bruce Courson.

This is a solid recording from start to finish. Garland has crafted a strong batch of songs that reflect his view of the world. He presents the tunes in a variety of styles with his fine guitar work as the focal point. Add his engaging vocals to the mix and this one is worth a listen.
Posted by Crossroads Blues Society at 4:12 PM