Tales from the Fence Line reviewed by Steve Jones 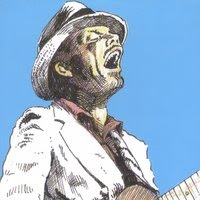 I had no idea what I was getting into with this CD but man, was I glad I got into it! Fontaine Brown has been around for decades. He cut his first single at Chess Records in 1962. He worked the Detroit Scene with Del Shannon and Bob Seeger in the 60’s working with rock, punk and Motown, then went on the road living out of his van with his band before settling down to song writing. 200 songs later, with the likes of Dave Edmunds, Percy Sledge, John Mayall, Dave Alvin, Joe Louis Walker, Emmylou Harris and even sampled by Gorillaz, Doug “Fontaine” Brown put a band together and created this fantastic CD of 12 cuts of all the styles of music he’s been around. It flows about nicely and seamlessly despite stylistic changes; there is a natural flow that allows the listener to move from genre to genre smoothly.

The CD starts with “Ain’t No Brakeman”, a rocking number that talks about how he can’t turn around and go back to his former woman because there ain‘t no brakeman on this train.” Good rocking stuff. The mandolin opening the title track “Fence Line” is a bit of a departure, but the solid vocals, harp, and guitar really sell this song. The band is tight!

“Detroit Saturday” is a funked up and fuzzed out number hearkening back to his origins in Michigan. It’s a driving cut that gets the juices flowing nicely. A little organ comes nicely into the next two cuts, “Closer to the Flame” and “Love Come ot rescue Me.” The former uses keyboards in a 60’s rock piece while the latter is more of a soul filled R&B number with B3 organ. He returns to Motown and its sound with “Southside Story”.

“Lost in the Sensation” is a Latin number a la the early Carlos Santana style of guitar and rock, with marimba backing it up nicely. A poppy rock song follows. “Wreck at the Crossroads” offers the listener another look from Brown and somehow you buy it all.

“Just Out of Reach” moves into a John Fogerty and Creedence guitar and vocal style and it’s pretty good. The next song features sitar and and Indian style of music, reminding me of the Beatles’ and other bands who introduced that and blended it into their rock. I didn’t want to like “Pool of Light” at first but about a minute in I was again sold, sitar and all.

Fontaine goes into a Canned Heat mode next with harp and distorted vocals. By now I’m so over sold that this guy can do it all that I believe. He closes out with a highway rock song called “Endless Road;” a dozen songs, a dozen styles, all blended into one CD and it’s cool.

I don’t know how he did it but the production just makes sense despite the consistent style changes. Don’t take my word. Go to CD baby (or his My Space), read about Brown and sample the tunes (in order) and you, too, will know what I mean. When the last song ends it will leave you tapping your foot and asking for more!
Posted by Crossroads Blues Society at 3:57 PM