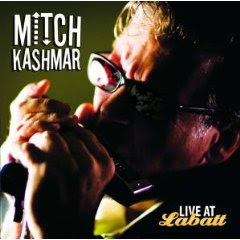 Mitch Kashmar should be regarded as one of the finest blues harmonica players working today. If you don’t believe me, you will after you hear this high energy set recorded live at the 2007 Labatt Blues Fest in Edmonton, Canada. Whether he is blowing long, mournful tones or upper-end trills, Kashmar delivers a steady stream of creative playing
without a hint of strain on a program that features selections from his previous two release from Delta Groove.

“Dirty Deal” finds Mitch working in the Jimmy Reed-style, working the high notes to great effect. On “Sugar Sweet”, Kashmar dazzles with two inventive solos to the delight of the appreciative audience. He pays tribute to his friend, the late William Clarke, on “Lollipop Mama”, his harp licks dancing over a swinging groove.

Guitarist John Marx was once a member of Clarke’s band, so he knows how to provide support for a harp player. When he gets a chance at the spotlight on “Whiskey Drinkin’ Woman”, he unleashes a biting solo in tribute to the woman who “..even puts that whiskey behind her ear!” The rest of the band – Jimmy Calire on keyboards, Tom Lackner on drums and Steve Nelson on bass – provide solid accompaniment throughout the set.

Kashmar also demonstrates that he is an expressive singer, particularly on a reworked Bessie Smith tune, “Evil Man Blue”. Two other highlights are his versions of the jazz standards “Song for My Father” and “Castle Rock.“ Kashmar’s skill and impeccable technique are on full display on both numbers as he improvises lines just like a jazz horn player.

Kashmar takes full advantage of the live setting to establish his credentials as a blues harp master. And it’s great to have another opportunity to hear the impressive guitar work of John Marx. This exciting release will definitely merit consideration as one of the top blues discs of the year.
Posted by Crossroads Blues Society at 4:11 PM