55 Years of the Blues reviewed by Mark Thompson 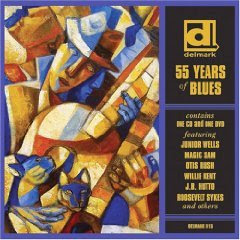 This two disc package serves as a reminder that the Delmark label remains the preeminent Chicago blues record label . With a catalog includes recordings from legends like Junior Wells, Otis Rush, Magic Sam, Carey Bell and Sleepy John Estes, Koester has spent decades documenting the talents of local musicians and providing them with world-wide exposure. He has also reissued recordings done for lesser known labels like United and Regal, giving blues fans another chance to hear forgotten recordings that have laid dormant and ignored. Earlier this year, Delmark received the Grammy Hall of Fame award for Hoodoo Man Blues, the 1965 classic Junior Wells record with Buddy Guy on guitar.

Wells leads off the CD with a live version of “Little by Little”, recorded at Theresa’s Lounge with the late Phil Guy and Byther Smith on guitar. Other cuts include Detroit Junior revisiting his best-known tune, “Call My Job,” with a fine Eric Schneider tenor sax solo - J.B. Hutto’s booming voice and slide guitar on a live “Evening Train” - and the country blues of Big Joe Williams with his 9 string guitar on “Coffeehouse Blues”.

Also featured are the soul-blues of Syl Johnson, female singers Bonnie Lee and Shirley Johnson plus the under-appreciated guitarist Jimmy Dawkins. Koester always loved piano blues and after you hear Speckled Red’s bawdy take on “The Right String But the Wrong Yo-Yo,” you’ll be a fan too !! One surprise was “Fine and Brown”, a track from piano man Roosevelt Sykes that features his engaging vocal and some great saxophone from “Sax” Mallard and Robert Crowder. The cd makes for a wonderful listen from start to finish even with the variety of styles and the span of time covered.

Not content to rest on their laurels, several years ago Delmark instituted a new series of dvds that document the working musicians on the current Chicago blues scene. These recordings are done in local clubs in front of a real audience. The importance of this work hit home when two musicians , Carey Bell and Little Arthur Duncan, passed away after each had completed their project.

The DVD portion of this set gives you a peek at the talents of Tail Dragger, a singer in the Howlin’ Wolf tradition, and the powerful style of singer/guitarist Byther Smith. One sequence captures Carey Bell on harp with his son , Lurrie, on guitar - just the two of them in Lurrie’s living room going deep into the blues on “Broke and Hungry”. Lurrie gets his own feature as do guitarist Dave Specter and Jimmy Burns. Zora Young rocks the house on “Til the Fat Lady Sings.”

Available on line for less than $17, this set is an incredible value economically and artistically. Even if you have lots of Delmark recordings already, you are bound to find something of interest on one of these discs. While the collection only begins to tell the Delmark story, it provides a big dose of high quality blues music that is sure to delight.
Posted by Crossroads Blues Society at 4:10 PM