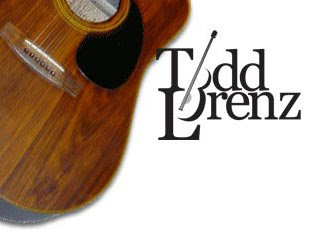 There are fifty two weeks in a year and Todd Lorenz has established a goal to write a song in each of them for 2008, or as he has called it ‘twenty aught eight’. And so with 13 weeks in each quarter of the year, the year will result in giving him four CDs of 13 songs each. The first two were released to the Rockford area when Todd opened our Blues in the School Evening show at the Just Goods Listening Room on October 21st. I gladly agreed to review them.

Todd is a big man with a big voice and an even bigger heart. I’ve listened to and reviewed his earlier works and enjoyed them all. While his output is not even nearly 100% blues, it is American roots music and it is delivered from that huge heart of his. His compositions reflect his emotions and feelings, from pains and emotion of a lost love to the primal urges between a man and a woman.

Working to a calendar would stifle the creative juices of most songwriters, but Lorenz seems up to the challenge. While all of his songs certainly are not award winners and stylistically there is a little bit of repetitiveness in a few of the tunes that are a bit sing-song, in general his songs allow us to see through the window to a bygone era in music. We have some songs that could easily be work songs sung in the field and certainly all of the songs could be played on the front porch or before a warm fire with family and friends, allowing them to evoke the gamut of human feelings.

Vocally, Todd has a big instrument. He has power and enunciates the lyrics with clarity and a folky tonal quality. His finger and thumb work on the guitar strings are excellent as is his mastery of the slide. Whether bending a note, playing a blues riff or playing accompaniment to a folk song, his guitar play is both precise and colorful. The instrumentals on V1 called “Moonbeams” and “The Meandering Hound” and “Two-Step on V2 are great examples and really highlight his guitar playing.
Examples of the downside of his emotion include the song where he curses God when he sings of losing his wife (“Lost in Pain”, V1) and ponders a failed relationship as a loner musician who leaves his family for the road (“Never Got Along”, V2) . The upside of his feelings are expressed in tunes like “Life is Good” (V2).. He gets a little whimsical yet serious about a woman who is “six feet of trouble...in her high heels” in “Six Feet of Trouble” (V2) .

There is a lot of music here in these two CDs. While I found a few of them to have similar tempos and melodic lines, they are generally pretty darn good. If you like acoustic music that ranges from a little folk to a little country to a little blues in a traditional sort of way, these CDs will please you. And you can always sample them and the upcoming V3 and V4 on Todd’s website.
Posted by Crossroads Blues Society at 4:02 PM