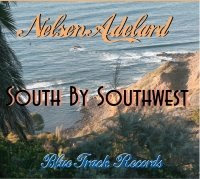 The West Coast blues scene has lost a regular due to the departure of Nelsen Adelard for his new home in McComb, Missisippi, but it resulted in an outstanding fifth solo album release that all of us (including the West Coast) can enjoy. “South by Southwest” offers us some insight into Adelard’s feelings about the move and both his old and new homes.

The first two tracks of the CD were recorded live from one of his last LA shows in July 2006 before leaving town. We can see why Nelsen and his band were a staple for LA blues. “One More Mile” is a hot numberswith some great horn accompaniment by Mark Norris on sax and the classic “Rocket 88” is a great rendition, also helped out by Norris’ horn.

The next eight tracks are all originals, covering the move from LA to McComb. He begins his travelogue with “I Ain’t Gonna Miss LA” and ends with “Sweet Home In McComb”, the start and end points of his move. Adelard bemoans missing the nights in Hollywood, his friends, his band and his baby, but not LA in a little West Coat Jump style. The McComb track is a slow, New Orleans styled blues number about his new home in McComb; Nelsen says that, “no matter where I roam, I’m comin’ back to my home in McComb”.

Building a new house gave Adelard the blues and he documents that well with “Contractor Blues.” Anyone who has built a new house or renovated an old one knows what he’s talking about in “needing a house he can use”. Nelson mostly focuses on guitar, harp and vocals, but he gives us a nice little bit of his boogie woogie piano starting in “Do What You Do”and in the next two tracks. “Can’t Get Through to You” is a slow bluesy rock song with song with some nice guitar licks and then Adelard flows that into a more rocking number called “Boogie on Down the Road,” with a big, rocking electric guitar sound and his harp playing back and forth with each other.

This is a solid CD. If you are already a Nelsen Adelard fan, you’ll find this album much to your liking. If you are new to Adelardom, you get a super glimpse of what he can do stylistically; he is equally comfortable with all forms of the blues and shows off his talents well. I’ve listened to this CD a lot in the course of prepping to review it, some from necessity but mostly because I really loved it!
Posted by Crossroads Blues Society at 3:59 PM